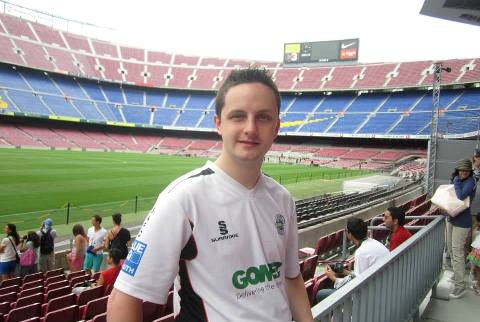 *BS*Callum reports on their visit:*BF* “In amongst the clubbing, tapas and beer we managed to fit in a stadium tour of Barcelona and Espanyol’s stadiums.

“Barcelona’s Camp Nou wasn’t really as awe inspiring as I expected it to be. The only thing impressive about it was the sheer size of it. But the facilities and views there were pretty average. You paid €23 for the tour and there wasn’t anyone guiding you around.

*Lpic1*”Espanyol’s Cornellà-El Prat, by contrast, was excellent. We were given an intimate, in-depth personal tour guide from a passionate fan, who was fluent in English.

“And quite amazingly, he recognised who Dover Athletic were because he once managed Basingstoke on Football Manager!

“We had converted him into a Dovorian by the end of the day and joked we would have to arrange a friendly between the two clubs.

“They allowed us onto the pitch and gave us access to all the VIP areas, including where the president sits. I’m not normally a fan of modern stadiums but I was really impressed by their 40000 all seater, which opened in 2009.”