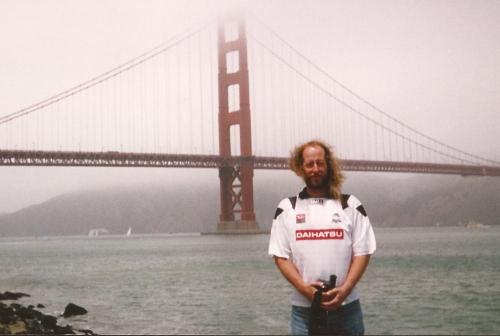 *BS*Above: Chris Collings at the Golden Gate Bridge near San Francisco in 1997.*BF*

Chris, who has probably watched more Dover Athletic matches than any other supporter, said:

“It was very cold and windy, and that was at the start of August! I had to miss a few Dover friendlies to go on this trip, but I was back for the first league game that season.”

“When I think about football, I think Dover Athletic and *Link2*. I tweet the odd message, usually “COYW!”… all the way from La Coruña in Spain.

“Why the Whites? I come from near Dover… Littlebourne, to be precise, and played for the Youth side when Chris Kinnear was in charge the first time in the early 1990s. No Dover player has scored so many goals having done so little work on the field as I!

“I am amongst those that want their club to offer more than just a trophy. I look for the extras… that the club provide opportunities for local kids, that the club doesn’t lose sight of what it really should be: something for Dover people to be proud of and hold close. I am a White.”