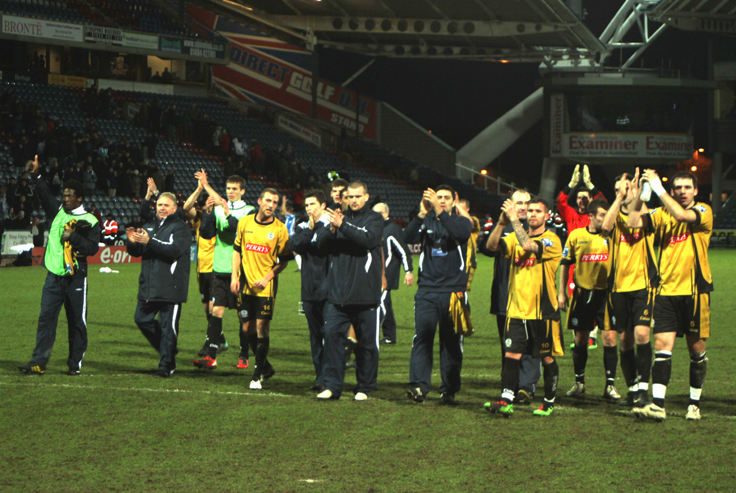 *BS*DOVER ATHLETIC players and their 1500 travelling supporters were given a standing ovation at the end of the 2-0 defeat at Huddersfield.*BF*

The League One side may have knocked Whites out of the Cup but Saturday will be remembered as a great day by all at the club.

Two early strikes by Scott Arfield and Gary Roberts punctured Dover’s hopes of an upset but did not deflate the players or supporters from producing an outstanding display on both sides of the fence.

The travelling fans kept up their constant singing and support throughout the 90 minutes, rewarded by a gutsy display from the players in an effort to get back in the game.

Olly Schulz had the supporters ready to celebrate with a bullet header from a corner but Roberts turned defender to stop the ball on the goal line.

After resisting the home side’s pressure early in the second half, including a tremendous save by Ross Flitney from Ireland International Kevin Kilbane, Dover started to play to their strengths and create some chances of their own.

Harry Baker, Adam Birchall and Sam Long all went close to scoring in the final stages but couldn’t conjure up the goal they and the fans deserved.

Dover boss Martin Hayes said: “I am proud of the boys, especially the way they came back. We threw everything we had at them in the 2nd half. It was just a shame we didn’t score.

*Lpic1*”We’ve got a lot of players here who are under 21 years old and they’ve showed a lot of maturity. Hopefully this will help us for the rest of the season. We want our big celebration in April.

“The fans were brilliant, they sang all day. Hopefully we made them proud and have given them something to remember. They’ve cheered us throughout the FA Cup run but it just wanted to be today.”

Huddersfield boss Lee Clark said: “All credit to the Dover lads. They showed tremendous desire. Everybody can be proud of them.

“They fought like tigers for their club and our keeper had to make two super saves at the end to keep a clean sheet.”