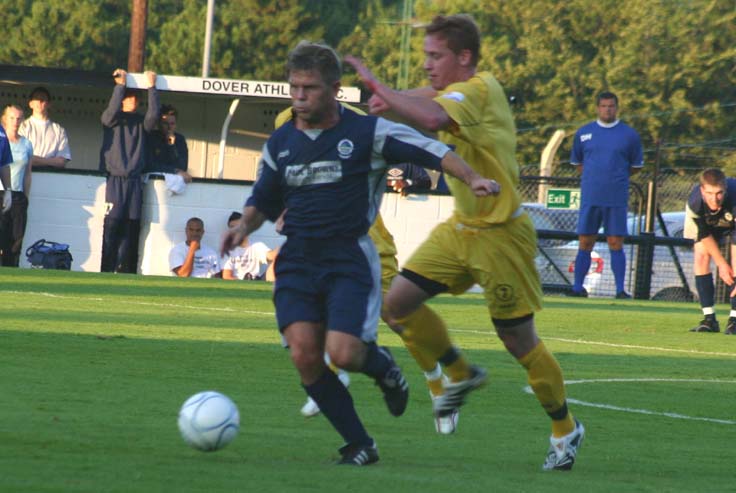 *BS*DOVER BOSS Andy Hessenthaler can confirm that the club had offered contracts to midfielder Alan Pouton and ‘keeper Dean Ruddy.*BF*

Former Gillingham star Pouton, 30, scored during the second half of Whites’ opening pre-season friendly against his former club on Saturday.

Meanwhile, American custodian Ruddy, who played for Horsham YMCA last season, has featured in both of Dover’s pre-season games so far.

Hess said: “We’ve spoken to both of the players about terms and offered contracts. But it’s one of those situations where the lads want a bit of time to think before committing themselves to Dover Athletic.

“However, I’m confident that both of them will put pen-to-paper either before or after the Crawley friendly tomorrow (Saturday).

“We’re building a strong squad here and we probably need another three or four players to complete it.

“We need a centre half. That’s a big priority at the moment. Obviously, Joe Vines has decided that the travelling is too much for him so we now look elsewhere.

“As I’ve said a few times, the French lad up front, Hamdi Razak, has impressed us and I’m currently talking to his agent to thrash out a deal. We need to make sure we can push this deal through within the parameters of our playing budget. But we’re working on something and we’ll see what happens.”

In other news, chairman Jim Parmenter confirmed that the club will be unveiling their new first-team playing kit and sponsor before the pre-season game against Crystal Palace at Crabble on Tuesday evening (7.45pm kick-off).