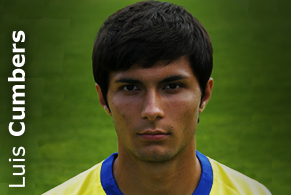 *BS*LUIS CUMBERS today signed on-loan from Gillingham to bolster the Whites firepower for the 14-match run-in.

*BF*The striker, 21, has been drafted in to provide much-needed cover and competition for places in the forward area.

He has already impressed during loan spells at Maidstone, Grays, AFC Wimbledon and Ebbsfleet.

Boss Andy Hessenthaler said: “Luis is a good player and has done very well at all the clubs he’s been on loan at. Obviously, he’s young but the boy is keen and talented.

“We needed to bolster the frontline with 14 massive matches coming up, which will decide whether we nail a play-off spot or not.

“Also Shaun Welford has bravely been playing with an ankle injury since December – and he cannot train as much, which is a little concern for us.

“We’ve only Shaun, Adam Birchall and Frannie up front – so if we had picked up an injury or two with no other options, it would have been a possible big problem for us.

“Everyone is geared to sealing a play-off place and then we have a chance to go for promotion.”