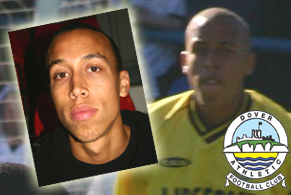 Cumberbatch, 21, is seen as one of Kent’s emerging young talents and has impressed Dover boss Clive Walker with a number of stunning performances at the back for Ashford this season.

The centre-half, who played first-team football at Barnet and had a spell at Erith and Belvedere, cut his teeth as a kid at Crystal Palace and Colchester.

He joined Ashford, where his dad John is joint-manager, in February.

And he put on a brilliant performance as Dover edged past Ashford 1-0 at Crabble in August.

Clive said: “He caught my eye in that match. The kid stopped a riot, he really did. The boy was everywhere and I thought ‘who is this?’

“Then I started doing a bit of research on him and spoke to a lot of people – and got some very good reviews.

“He’s a young, bright player, with a lot of pace. He’s certainly quicker than a lot of the lads we have at Dover and I think he’ll strengthen us no-end at the back.

“Marc wants to improve and develop as a football player. He wants to get back up the football ladder, which is exactly what Dover Athletic are aiming to do, too.

“We certainly needed to add more depth to the defence because had we got one more injury we’d be really struggling.”

Marc is a professional double of Arsenal’s French superstar striker Thierry Henry. He jets all around Europe making appearances and this Saturday is flying to Barcelona.

The club are hoping to hand him his debut against Banstead Athletic before he leaves for Spain in the evening.

Clive said: “He does spend a lot of time abroad doing this but rarely misses games. We’ve got to deal with that – but the lad makes a decent living out of it.

“However, he’s totally dedicated to his football and I believe he’ll be a great addition to Dover Athletic.”

Marc cannot wait to pull on the white shirt and believes Dover are just the club to help him progress.

He said: “Dover are a big club. I can see that by looking at the ground and the crowds they get.

“It’s been great at Ashford. They’ve been good to me and I think they’ve been very unlucky this season. They’re a better side than their league position suggests.”

Marc has met the great man at Highbury and says he is a top man.

He said: “Thierry is a really relaxed guy – and we meet when shooting adverts and stuff. I do some of the shots for him and it’s good fun.

“I have to go away quite a bit. We’re doing an adidas advert this weekend. I’m hoping I’ll still be alright to play for Dover. If not, I’m back Monday and will be available for selection next week.”

Chairman Jim Parmenter added: “We welcome Marc to Dover. This club is always scouting for young emerging talent that will improve our squad and Marc fits the bill.

“Fans have jokingly asked if we could sign Thierry Henry – well, we’ve got the next best thing!”

WHAT THE MEDIA HAVE SAID:

“Ashford failed to clear the danger effectively and Dulwich punched back, the ball reaching de Souza on the edge of the area.
A mighty wallop from big Mig but Marc Cumberbatch bravely threw himself on that grenade to protect his goal.”
Source: South London Guardian

“An early corner by Ben White found Sean Ray’s head at the far post, but Marc Cumberbatch managed to block the goalbound effort and the ball was scrambled to safety.”
Source: Hastings United official website

“The absence of Cumberbatch Jnr is the biggest loss, given that we’ve at least looked solid at the back with him in central defence for the first five games.”
Source: Ashford Town official website