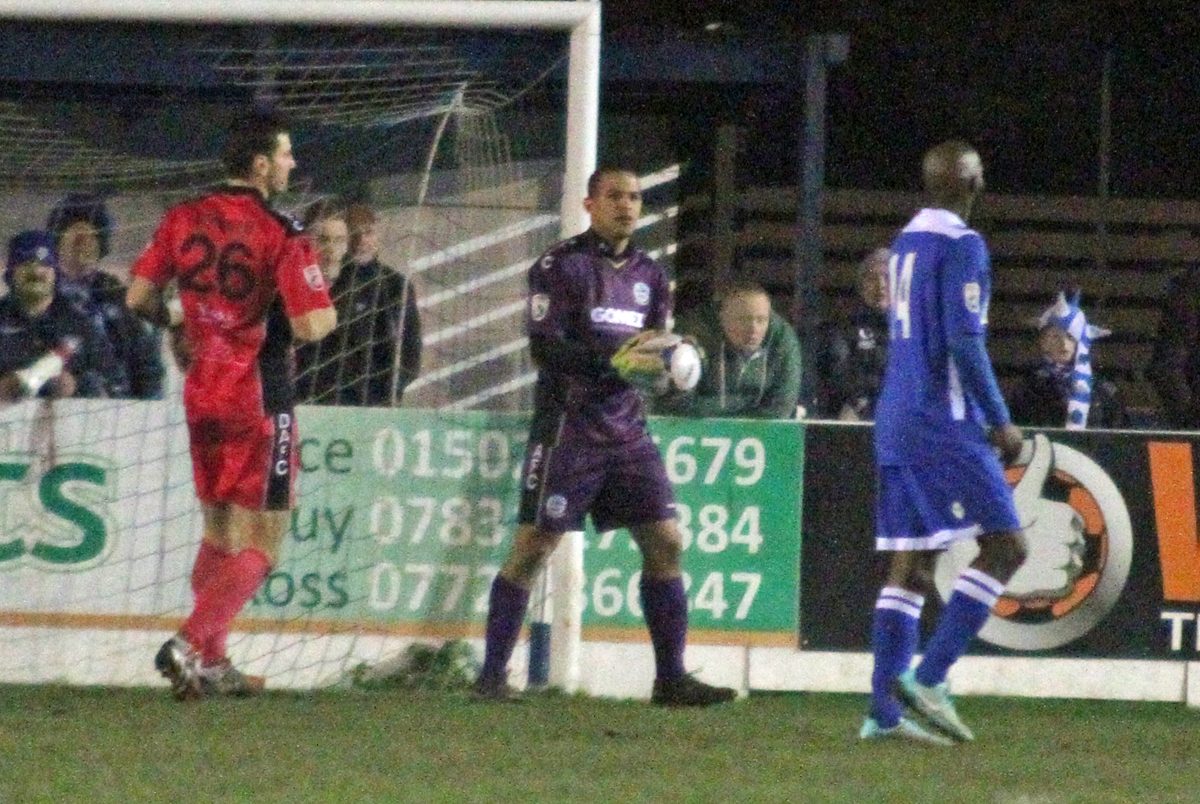 Dover brushed past Lowestoft to set up an FA Trophy second round trip to either Weymouth or Havant and Waterlooville, in spite of having defender Tom Wynter in goal after Andy Rafferty had been sent off for a professional foul in the first half.

Expectation would be that Dover’s emergency stopper would have had to pull off a string of saves to keep Lowestoft at bay, given the home team had all the initiative, but Wynter admits it was a completely different story. ‘I really did not have a lot to do to be honest. I had to come out and collect the ball twice and catch it once because the defence were so solid and we were in complete control of the game. We really frustrated Lowestoft and hit them on the counter attack.’*Lpic1*

Tom did pick the ball out of the net once though, as he instantly faced the penalty given against Whites after Rafferty’s foul. ‘The first thing I thought was how cold I was standing it goal! I admit I made a really poor effort to try and stop the penalty, even though Hooky (Lee Hook) offered me £50 if I saved it!’

Saturday was the second time this season Whites have needed an outfield player to step in between the sticks. Sean Raggett donned the gloves away to Dartford earlier this season after Mitchell Walker suffered a serious arm injury, but the home team won 2-1 late on. This time Tom was happy to volunteer for the role. ‘To be honest there was no way I could let Rags (Sean Raggett) go in goal again as he was terrible, so I told the gaffer I was decent in goal! The only thing I was nervous about was taking goal kicks, but after the first one I was fine.’ He also added. ‘I don’t think I’ll volunteer to go in goal against Palace though!’*Q1*

With Andy Rafferty suspended for Saturday’s upcoming trip to Altrincham and Mitchell Walker only just back training after his injury, it is likely that goalkeeping coach Lee Hook will fill the number one spot, though he has not have played many games recently. ‘Mitch has already offered to play’ said Tom’, but I don’t think the physio is keen. Hooky is still a quality keeper though.’ He also joked ‘he just cannot play back to back games as he seizes up for a week after a match!’

Wembley beckons for Dover should they win the next four ties and Wynter is confident Whites have what it takes to make it to the final. ‘We are taking this competition seriously and definitely going for it. This team has got lots of character and quality and we really don’t fear anyone right now!’*Lpic2*