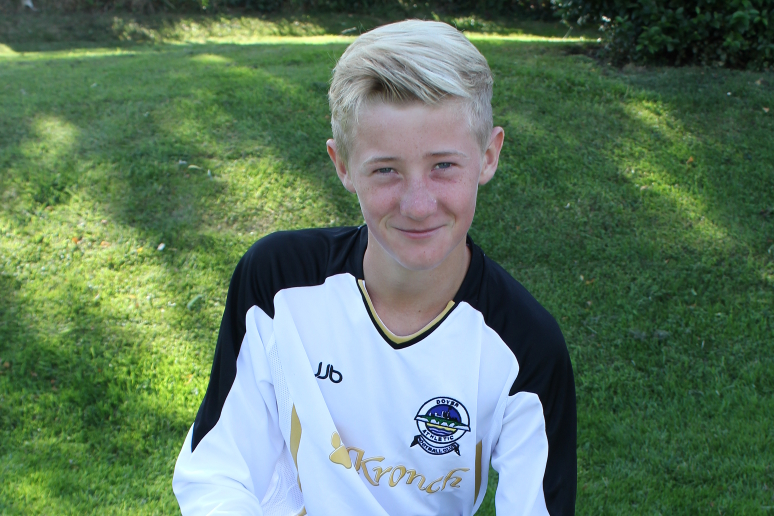 *BS*Congratulations to Ryan Hanson who has just signed for Premier League side Crystal Palace having impressed in a 6 week trial.*BF*

Ryan, who lives in River and attends Dover Boys Grammar School, was scouted by the South London club whilst playing for Dover Athletic’s under-13 side in a Kent League tournament last May.

Ryan had played for Dover Rangers since the age of 6 and moved over with his teammates to Dover Athletic this season for their first year in the Kent Youth League.

The youngster impressed in the first three weeks of his trial last October, but because he wanted to continue to play for Dover, the rest of trial was put on hold until this March. The final three weeks included playing games against Brighton, Charlton and Chelsea, and following that final game he was offered a contract until the end of the 2014/15 season.

Ryan is believed to be only the second outfield player that Palace have signed in this age group in the last eighteen months.

Ryan’s dad, Simon, explains further: “We felt that this was too early for him to join an Academy, and decided to wait and see if there was any interest in him ready for his under 14 season.

“We were keen for him to try at Palace as they have an excellent reputation for their Academy and were prepared to be patient to allow him to finish his season with Dover and recognise the benefit of his education whilst developing his football.

“We wanted to give Ryan the best opportunity to develop whilst wanting him to have fun and enjoy his junior football. He has also, up until recently, trained with Soccer Elite at Maidstone with two coaches with strong Dover connections – Lee Spiller and Tony Browne.”

The Youth Section of Dover Athletic aim to develop young footballers and are proud to produce high calibre players that are good enough to sign for Premier League, Championship and Football League Clubs.

Dover Athletic’s under-13 side enjoyed a successful season, finishing third in their division and ending the campaign as the league’s top scorers with 56 goals in just 16 games. The side play their home games at Tilmanstone in the Charlton Athletic Valley Express Youth League, and have this season recorded notable wins of 12-0 against Invicta Lions, 9-0 versus Margate Youth and 9-2 over Canterbury City.

If you would like further information on how to join Dover Athletic’s Academy setup, please contact Academy Manager, Mike Sandmann, for more details: msandmann@abbeyschoolfaversham.co.uk

Based at the Abbey School in Faversham, the Academy team benefit from excellent facilities and modern 3G training pitches, and play many of their home fixtures on the superb pitch here at Crabble.

Dover Athletic would like to congratulate Ryan on his successes and we wish him all the best in the future.