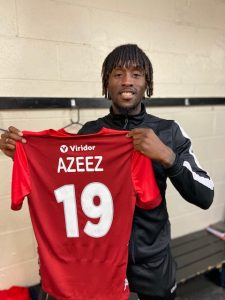 Azeez, who will wear the No.19 shirt, is no stranger to Dover fans, having played 12 games for us, scoring once, while on loan from Cambridge United during the 2017/18 season.

The Sidcup-born frontman left Newport in September after his contract was cancelled by mutual consent and he moved home to Kent.

Azeez started his career with Charlton Athletic and had loan spells with Wycombe, Leyton Orient, Torquay and Dagenham & Redbridge while with the Addicks.

The 26-year-old has also played for AFC Wimbledon and helped them win promotion out of League 2 in 2016 and played 46 games for Scottish Premiership side Partick Thistle in the 2016/17 season.

A move to League 2 Cambridge United followed before he joined Newport in January 2019.