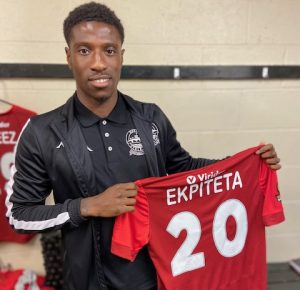 A defender like his twin brother, Blackpool’s Marvin,  Marvel joined the club in October 2020.

He had joined Macclesfield Town from Newport County last month, but his time with the Silkmen was short-lived after the club was wound-up in the High Court over unpaid debts.

He joined Newport ahead of the 2019/20 season, making his professional debut in the EFL Trophy fixture against West Ham United under-23s.

Capped at under-20 level by Nigeria, Ekpiteta, who will be wearing number 20, spent much of last season on loan at Ebbsfleet United, making 25 appearances and scoring two goals.