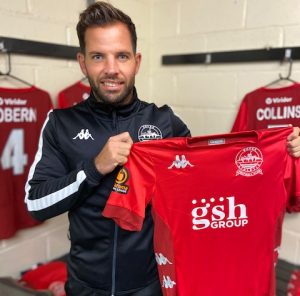 The 34-year-old left-back joined us in August.

Wood, who has been appointed our captain this season, made 36 appearances in all competitions for Bromley last season, including both National League games against us, before his release this summer.

Wood started his career with Cray Wanderers before joining Bromley for the first time, making over 150 appearances in three years with the Ravens.

He then joined then League Two side Brentford, and went on to win the promotion with the Bees in his first season with them – he was also named Supporters’ Player of the Year.

Wood made more than 100 appearances in three years with Brentford and also spent time on loan with League Two Rotherham United, making 27 appearances.

After that loan spell, Wood joined Wycombe Wanderers in July 2012 and spent five seasons with the Chairboys, making 213 appearances and scoring 16 goals.

At the end of the 2016-17 season, Wood left Wycombe and signed for Eastleigh.

He spent a season with the Spitfires, where he played under now Dover manager Andy Hessenthaler, before returning to Bromley ahead of the 2018/19 season.

During his career, Wood has also done some body doubling for Lionel Messi and Cristiano Ronaldo in adverts.