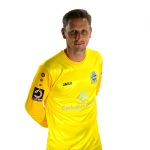 Goalkeeper who joined us In October 2018 from Maidstone United where he played more than 280 games in all competitions.

Worgan wore the captain’s armband for two-and-a-half years at our National League rivals and had been an ever-present for Stones during over five seasons prior to arriving at Crabble.

He moved to the Gallagher in 2013 after spending five years between the sticks at Tonbridge Angels.

The stopper made his Whites’ debut in December 2018 during a 2-2 draw against Havant & Waterlooville in the FA Trophy, before playing a starring role and saving a penalty on his first league start three months later, a 3-0 home victory against Braintree Town.

Worgan, who is also Athletic’s goalkeeper coach, played 10 of Dover’s final 11 matches of the 2018/19 campaign.