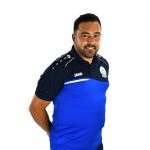 Lead Sports Therapist who has been with Athletic since October 2018.

Having started out as a player, Torgut spent his youth career with Aston Villa, before moving to Burton Albion and then Tamworth.

It was during his time with the lambs the then 24-year-old midfielder moved into sports therapy, working as the Conference North club’s physio for three years from 2006-2009.

Huseyin then moved to Barnet in the same role, working alongside then player/manager and former Dutch international and Champion’s League winner, Edgar Davids, for a campaign.

A move to Championship side Charlton Athletic followed, where he spent six years with the Addicks, with a short spell at Greenwich Borough afterwards which ended with Huseyin winning three of his five matches as caretaker manager, before his move to Crabble.