The Gulls captain was on hand to nod in from visiting stopper Yusuf Mersin’s parry and then headed in a corner on the stroke of half-time.

Andy Hessenthaler’s men fought to find a way back into the match after break, but were unable to find way through a solid United defence.

The loss leaves Whites second from bottom on the National League ladder with three points, however the result may well have been different had Athletic converted a guilt-edged chance five minutes prior to Torquay’s opener.

Steven Rigg tricked his way to the byline and presented TJ Bramble with the goal at his mercy, however the midfielder was unable to convert after getting his feet mixed up.

Athletic had gone close to opening the scoring early in the game when Jack Munns sent a dipping volley the wrong side of the post,

Bayli Spencer-Adams, making his debut for Dover after signing on loan from Watford the previous day, then saw his shot well blocked by the home defence.

Bramble jumped to head Cameron’s bouncing header off the line, but the Dover defence was powerless to stop Torquay’s captain from opening the scoring in the first half.

A corner was well parried by Mersin, only to kindly fall for Cameron, an invitation the centre-back was only too happy to accept as he headed the ball into an empty net, despite Bramble’s attempt to stop the ball from crossing the goal line.

Turkish stopper Mersin then tipped Aaron Nemane’s stinging drive onto the base of the post.

Dover’s mission to stop a run of three straight defeats was dealt a further blow on the stroke of half-time when Cameron headed a set piece into the bottom corner.

The Turkish goalkeeper continued to repel the Torquay attack, diving onto Danny Wright’s volley after the restart.

The Kent side almost reduced the arrears late on, as home stopper Lucas Covolan tipped Munns’ accurate effort behind for a corner and then grabbed onto Rigg’s header.

Torquay almost sealed the win in injury time, only for a mixture of the woodwork and Mersin to somehow prevent substitute Asa Hall from scoring.

Earlier, Hessenthaler made five changes to the side that started the 5-0 home loss to Aldershot on Tuesday night.  Mersin, Spencer-Adams, Kurtis Cumberbatch, Bramble and Josh Passley came in for Josh Bexon, Will Moses, Ade Azeez, Travis Gregory and Marvel Ekpiteta with the latter three all not involved due to injury.

Dover next travel to Yeovil Town in the Emirates FA Cup Fourth Round Qualifying on Saturday 24th October 2020. 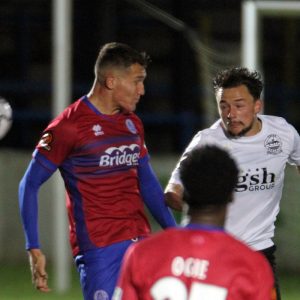 Whites were comprehensively beaten by Aldershot on Tuesday evening at Crabble.

Whites remained on the backfoot and were indebted to Steve Rigg for heading a dangerous shot off the line.

Travis Gregory’s looping shot almost caught out Shots goalkeeper Mitch Walker, but the former Dover goalkeeper was able to get back onto his line to turn the ball over for a corner.

Andy Hessenthaler’s men conceded after the half hour mark when Panayiotou tapped in from close range after Bexon parried a corner into his path.

A few minutes later, The Shots doubled their lead from a counter attack, which ended with Bettamer cutting inside and firing in from 25-yards.

Aldershot scored a third on the stroke of half-time when a poor pass set Rees free to poke home Tanner’s cross.

Rees slotted past Bexon to double his tally for the evening and Bettamer’s late deflected effort compounded a miserable night for Athletic.

Earlier in the evening, manager Hessenthaler made one change from the defeat at Stockport, with Akheem Rose replacing Bilel Hinchiri.

Dover next travel to Torquay United in the National League, kick off 3 pm. Last season’s National League Player of the Year, who joined Stockport in the summer from Barrow, slammed home a second half penalty, before slotting in his second and County’s third late on.

Substitute Alex Reid had earlier doubled the home side’s lead as Athletic were unable to build on a first half clean sheet.

Andy Hessenthaler’s men, including centre-back and academy youngster Will Moses making his National League debut, defended resolutely throughout the opening 45 minutes and nearly stunned the home side when Steve Rigg slid and narrowly missed Ade Azeez’ vicious cross into the Hatters’ area.

It took the hosts until just before the break to have their first meaningful effort on goal as Connor Jennings mis-kicked twice within the space of a couple of minutes.

The home side made their breakthrough when another Dover debutant, goalkeeper Josh Bexon, upended Reid in the area, with Rooney making no mistake from 12 yards as he sent Athletic’s stopper the wrong way.

Reid volleyed over from the edge of the box, but the attacker was more precise with his next opportunity.

The striker converted Richie Bennett’s pass, and despite protestations from Dover for a foul on Will De Havilland in the build up, the goal stood, leaving Hessenthaler’s side with the challenge of scoring at least two goals.

That task proved insurmountable for Whites and though Rigg went close with a close-range header, it was Stockport who put the game beyond doubt at the end when Rooney fired Sam Minihan’s lay-off into the bottom corner.

Earlier, boss Hessenthaler made three changes to the side that started the 4-1 against Bromley on Tuesday night, with Bexon, Moses and Bilel Hinchiri replacing Yusuf Mersin, TJ Bramble and the injured Harry Ransom.

Dover are back in league action on Tuesday 13th October when they host Aldershot Town, kick off 7:45 pm.

Dover’s first away league match of the National League campaign ended in a humbling 4-1 loss at Hayes Lane on Tuesday night, however the final score might well have been very different when Sam Wood reduced the arrears.

With his side behind to goals from Michal Cheek and Jack Holland either side of the break, Whites’ captain Wood, playing against the side he featured for last season, slotted in Travis Gregory’s driven pass across the box, with Steven Rigg and Ahkeem Rose both missing chances to level.

Unable to capitalise on their dominance, Athletic were punished when Bromley extended their lead via Ben Williamson’s smart finish with 17 minutes remaining.

A second consecutive defeat at Hayes Lane for Andy Hessenthaler’s men was confirmed in injury time when Cheek pounced on away stopper Yusuf Mersin’s mis-kick.

Harry Ransom’s injury was the first of a double blow for Dover as just after the defender had pulled up, Ade Azeez’s intended pass to the Millwall loanee was intercepted by Harry Forster.

The youngster, on loan from Watford, took full advantage of the space ahead of him, passing the ball across the box for Cheek to slide in the opener.

Mersin dived low to turn Williamson’s bottom-corner bound shot around the post and the same player was unable to keep a far post header on target.

Azeez’ spectacular back-heeled volley flew narrowly over the bar after the break, however the Raven’s scored a second despite initial heroics from Mersin.

The Turkish keeper saved Billy Bingham’s fierce free-kick and despite stopping Holland’s initial rebound, Mersin was unable to prevent Bromley’s captain from bundling the ball over the line.

Rigg saw an effort fly agonisingly wide and a well-worked corner routine from Jack Munns and Wood ended with Rose blazing high over the cross bar.

Dover through caution to the wind and introduced striker Louis Collins, making his National League debut, however were punished by two late goals.

Williamson sprinted onto a flicked-header and slotted the ball past Mersin to extend the home side’s two-goal lead, with Cheek pouncing to wrap up the points in the injury time.

Earlier, boss Hessenthaler made one change to the side that started against Notts County, with Gregory replacing the injured Josh Passley.

Whites next travel to Stockport County on Saturday 10th October, kick off 3 pm.

Winger who earned himself a contract after impressing in pre-season ahead of the 2020/21 season.

He spent time in the youth ranks at both Chelsea and Rangers.

Gregory, 25, has spent the past two seasons with Leatherhead, scoring six goals in 28 appearances last season.

Young striker who signed for the club in August.

The 19-year-old spent last season playing for Sevenoaks Town in the Isthmian League South East Division, a club managed by his father Micky.

The two-time Kent Youth League Golden Boot winner joined The Oaks following his release from Scunthorpe United after they were relegated to Sky Bet League Two.

Defender Harry Ransom arrived on loan from Championship side Millwall in October.

The Lions under-23 captain made the move to the New Den from National League South side Eastbourne Borough in the summer of 2019.

Our new number 18 started his career at Brighton & Hove Albion before moving to Eastbourne at the age of 15.

He made his senior debut during the 2016/17 season and become the club’s youngest ever captain at 19. 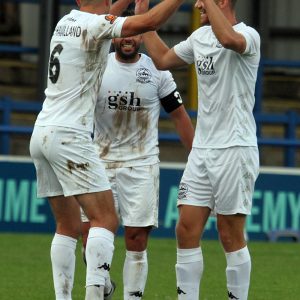 Millwall loanee Harry Ransom sealed his impressive debut with a match-winning goal against Notts County at Crabble on Saturday.

The big centre half headed home Jack Munns’ pin-point corner in the final minute of normal time to earn manager Andy Hessenthaler’s side  a deserved three points on the opening day of the National League season.

The Magpies replied with Cal Roberts, who was a doubt for the game, saw his shot saved by Yusuf Mersin before Richard Brindley’s effort was deflected wide.

Steven Rigg tried his luck from distance just before half-time but his effort sailed wide.

Rigg then saw his header from Munns’s excellent cross well save by the keeper just after the break.

The second half looked more open than the first and Roberts went close for the visitors yet again after beating his man and shooting just wider.

Kyle Wootton then went close after the ball was played in from the corner, however his turn on the volley went wide.

Substitute Bilel Hinchiri saw his overhead kick go over before Ransom sealed the points with a thunderous header that crashed into the net off the underide of the bar.