WHITES drew 1-1 at Guiseley thanks to a stunning first-half equaliser from Nortei Nortey.

Both sides fought for a winner after the break, but the points were shared at a chilly Nethermoor Park.

The forward then tried himself moments later, but could only strike the top of the crossbar with a thunderous effort from close in.

But shortly after Walker tipped over Kayode Odejayi’s header from a corner, Rooney had better luck with his next effort

The playmaker’s set-piece struck the visiting wall and spun into the net past a stranded Mitch Walker to put the hosts ahead.

Dover’s stopper then somehow denied Jake Lawlor on the half-hour mark, tipping the defender’s header onto the post with his defence able to clear the danger afterwards.

And that save proved crucial as Athletic levelled moments later with their first shot on target.

Sub Reece Thompson, on after Raul Correira was stretched off with a serious-looking injury following a collision with Giancarlo Gallifuoco, shot just wide when well placed.

Manny Parry headed just past his own post in first-half stoppage time and claims for a handball against Ryan Bird in his own box from the resulting corner were waved away by referee Andrew Miller.

Bird and Daniel both fired efforts directly at Lions keeper Joe Green after the restart and Mitch Pinnock was unable to beat the goalie from a tight angle after latching onto Bird’s flick-on.

The hosts almost won the match late on after Thompson robbed Connor Essam, but the striker could only find the side-netting when shooting towards the near post.

There was one last chance for Paul Cox’s men, but Walker was well-positioned to get in the way of Lawlor’s diving header from Rooney’s free-kick.

The draw sees Whites drop one place in the table to third, one point behind latest leaders Sutton United.

Earlier Chris Kinnear named the same line-up that started last Saturday’s 4-0 home win against Chester. Paul Lewis, signed on loan from Cambridge on Friday, was named as a substitute in place of Chris Lewington.

Dover’s next game is against Solihull Moors at Crabble on 30th September. Kick off 3 pm.

Whites beat the Yorkshire side for the third consecutive time in the National League to stay firmly in the playoff race with a commanding performance at Nethermoor Park.

Miller, back from his two-game suspension, opened the scoring with his 31st league goal of the season to give boss Chris Kinnear’s side a half-time lead.

Modeste added the second, Miller doubled his tally from the penalty spot before a Lafayette penalty completed the rout to end Guiseley’s five-game unbeaten run.

Dover, who are seventh after the win, two points, but with two games in hand over fifth-placed Aldershot, started the game brightly.

James Hurst volleyed well wide against his former club from Joe Healy’s corner before Miller’s effort went over with home goalkeeper Jonathan Maxted out of position.

But it wasn’t long before Miller, who was also on target against the Yorkshire side in the 2-0 win at Crabble earlier in the season, did find his range.

He controlled Connor Essam’s long free-kick from inside Dover’s half before swivelling and firing past a stunned Maxted in the 15thminute.

Mitch Walker made his only real save of the day just before half-time, going low to take Hurst’s shot.

Miller continued to pose a threat and ended the half with a shot fizzing just inches wide of Maxted’s goal.

Emmanuel had the first shot of the second half, seeing his effort from a tight angle hit the side netting minutes after the restart.

Hurst was next to try his luck, seeing his shot from the edge of the box curl over Maxted’s goal.

Miller went agonisingly close to doubling the lead in the 65th after his lob over Maxted hit the post and bounced clear.

But just a couple of minutes later Dover did go two-up after Modeste headed home Emmanuel’s cross from close range.

Miller stung Maxted’s hands with a thunderous free-kick as Dover went in search of a third.

It came from the penalty spot nine minutes from time after Miller was bundled over in the box and he got up to blast past Maxted.

Substitute Lafayette completed the job from the penalty spot deep into stoppage time after he had been brought down.

It was his first goal since the win at Maidstone United on New Year’s Day.

Earlier, Kinnear made two changes to his starting side with Miller and Fazakerley coming in to replace Lafayette and Sam Magri.

Magri was on international duty with Malta while Lafayette dropped to the bench.

Aswad Thomas was suspended after his red card against Bromley last Saturday while Bondz N’Gala was still unavailable due to personal reasons. 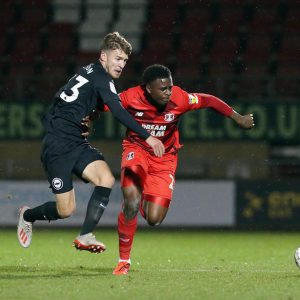