Elliot Justham has had a fine season for the Daggers

Three Dover players will be familiar with their surroundings when the teams take to the pitch on Saturday.

Josh Passley played 25 matches for Dagenham during the 2015/16 campaign.
Kevin Lokko had a 25-game loan spell with the Daggers durimg the 2017/18 season.
Jack Munns featured 26 times for the Essex side last season.

For those wanting to wear the same shirts as the players on Saturday, Dover will be wearing their x tops.

DIRECTIONS TO THE CHIGWELL CONSTRUCTION STADIUM

DOVER ended their miserable record at Dagenham with an impressive 3-1 win on Tuesday night.

An audacious backheel from Alfie Pavey five minutes after the restart added to first-half goals from Jamie Allen and Bedsente Gomis.

The hosts pulled a goal back through sub Will Wright with 20 minutes to play, but Athletic held on to move eight points clear of the National League Relegation zone.

Earlier, after evading a Dagenham challenge, Josh Passley sent in a dangerous cross that bounced off Ben Nunn towards Pavey, but Dover’s striker was unable to get a shot away.

Connor Wilkinson found the angle to acute as he sprinted onto Angelo Balanta’s through ball and smashed the ball behind the goal.

The first shot on target came from Pavey, who volleyed Mitch Brundle’s chest down goalwards, only to see home keeper Elliott Justham push the ball behind for a corner.

Visiting stopper Lee Worgan was called into action moments later, blocking Balanta from point blank after Liam Gordon had passed the ball into the area.

That save proved crucial as the away side went ahead on 21 minutes.

Stuart Lewis passed to Allen, who took a touch away from his marker and buried his shot in the bottom corner for his sixth National League strike of the campaign.

And Dover boss Andy Hessenthaler would have been even happier seven minutes later as his side doubled their lead.

Bobby-Joe Taylor sent in a perfect delivery for Gomis to loop a header over Justham and into the top corner.

Visiting fans were in dreamland when Whites scored their third goal without reply five minutes after the restart as Pavey grabbed his fourth league goal in five games.

With his back to goal, Pavey collected Kevin Lokko’s knockdown and nonchalantly back-heeled the ball into the bottom corner past a stunned Justham.

Daggers did pull a goal back on 69 minutes when Wright volleyed past Worgan.

The replacement continued to cause the visitors problems, this time sending a thunderous effort goalwards and forcing Worgan to tip the ball over the crossbar.

Home fans were soon celebrating, but not for long.

Sub Chike Kandi, introduced at the break for Wilkinson,  had the goal at his mercy as he met Balanta’s cross into the area, but directed his header into the grateful hands of Worgan as Dover’s goalie held the ball on the goalline.

Nunn then went through on goal, but his cross-cum-shot was out of reach of that outstretched Munns sliding in.

Sub Inih Effiong sprinted through to seal the win, but Justham managed to get a fingertip on the ball to stop the forward finding his first goal of 2019.

Boss Hessenthaler made two changes to the side that started in their last game at Halifax.  Josh Passley and Scott Doe came in for Danny McNamara, who returned to his parent club Millwall following his loan spell at Crabble, and Anthony Jeffrey, who started as a substitute.

Whites next travel to Solihull Moors in the National League on Saturday 30th March, kick-off 3 pm.

The Daggers almost took an early lead when Sam Ling snuck in at the far post to nod Corey Whitely’s zipped corner into the side netting.

Visitors Dover should have gone ahead two minutes later, but Cousin flung himself across his goalmouth to tip away James Alabi’s header after Mitch Brundle’s mishit volley fell kindly for the loanee.

The striker then blasted narrowly over following a powerful surge into the area.

Cousin’s opposite number Mitch Walker then performed his own acrobatics, stretching to divert John Robson’s dipping header from the edge of the box from underneath the crossbar.

But there was nothing Athletic’s stopper could do about the home side’s opener midway through the first half.

The impressive Ling latched onto Cousin’s inch-perfect throw and sent in a delicious ball for Ferrier to head home from close range.

Ling then blasted over from an acute angle and the winger forced Walker into a low save with a drilled effort from the edge of the box.

Dagenham’s keeper denied Alabi once again in first-half stoppage time. The attacker powered Mitch Pinnock’s pinpoint cross towards goal, only for Cousins to somehow claw the ball away to safety.

And the 30-year old goalie made his best save just after the break to prevent what seemed a certain equaliser for Whites.

Having beaten Jake Howells out wide, Pinnock’s goalward volley appeared destined for the top corner. But Cousins clearly had other ideas and was somehow able to turn the winger’s shot behind for a corner.

Walker then ensured his side stayed in the game, blocking Ferrier’s angled effort with Michael Cheek firing over the rebound.

And Cousins thwarted the visitors once again, smothering the ball before Pinnock could latch onto Nortei Nortey’s through ball.

Whitely’s strike from near the byline clipped the bar and the winger then forced Walker into a fingertip save with a curling effort.

And John Still’s team should have doubled their lead in injury time, but sub Dan Sparkes blasted past the post when put in the clear by Whitely.

Earlier, boss Kinnear made one change to the side that started away at Leyton Orient. Loui Fazakerley replaced the injured Josh Passley.

Athletic next face AFC Fylde at Crabble on Saturday 25th November at Crabble. Kick off 3 pm.

Daggers to the heart

It’s not all-White at Dagenham for Dover

DOVER’S delight at beating Forest Green Rovers on Saturday proved to be short-lived.

Dagenham & Redbridge ensured that after beating Whites 2-0 at Victoria Road on Tuesday night.

The defeat, Dover’s seventh in 11 games against Dagenham, also saw boss Chris Kinnear’s side drop two places to 10th while the Daggers moved up to second.

And to complete a disappointing trip to east London, Richard Orlu injured his hamstring in the second half.

Kinnear made no changes to his side following the 4-3 triumph over Forest Green Rovers, but it didn’t take long for the Daggers to seize the initiative.

Dover missed a glorious opportunity to get back on level terms 10 minutes later after Ross Lafayette shot wide from close range after Aswad Thomas’ clever header put the striker clear.

It was Dagenham who threatened next with Arnold making two smart saves in as many minutes to keep out two shots from Corey Whitely.

And it was the impressive Whitely who was at the centre of his sides second goal six minutes before half-time.

He won a penalty after tangling with Orlu and Hawkins’ breathed a sigh of relief after his shot went in off the post to register his eighth goal of the season.

And it was Hawkins who went close to adding to his tally just after half-time when his header went just over.

His header was cleared off the line by Fejiri Okenabirhie, not that the winger knew much about it, the ball crashing into him before being cleared.

Ricky Modeste then saw his shot turned away by Dagenham goalkeeper Elliot Justham before Arnold denied Maguire-Drew from close range.

Ira Jackson jnr came on to make his debut, replacing Modeste, while Moses Emmanuel came on for Lafayette but the changes could not prevent Whites losing their second away game of the season.

Whites are on the road again on Saturday, travelling to 16th placed York City. 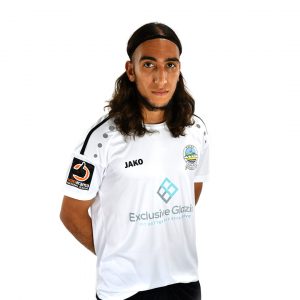 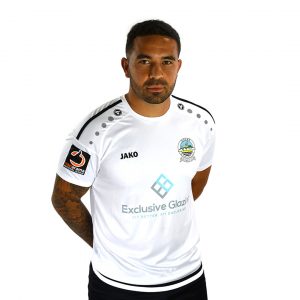