Whites are back to National League action this weekend following a ten-day break.

Andy Hessenthaler‘s men travel to Hampshire on Saturday in good form, having won three of their previous four league games, A run that has moved Athletic up to ninth on the league table, one point outside the top seven.

Eastleigh were in action at the Silverlake Stadium on Tuesday evening, coming back from two goals down at the break to draw 2-2 against AFC Fylde, extending their unbeaten home run to three matches.

Ben Strevens‘ men had started February with a 2-0 home win against Woking, following a goalless draw at home to Aldershot Town.

The Spitfires last away match, at Maidenhead United on Saturday 25th January, ended in a 2-0 defeat.

Visiting fans will recognise one of the Eastleigh attack on Tuesday night.

Former Whites striker James Alabi, who signed on loan for the Spitfires from Leyton Orient in January, scored his first goal for the Hampshire side last month against Fylde. 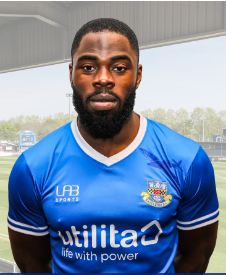 You can view Eastleigh’s full squad list below. (Credit Eastleigh FC for photos)

A couple of Dover’s squad will be familiar with their surroundings when the sides take to the pitch on Saturday.

Jai Reason made over 100 appearances for the Spitfires during his time at the Silverlake Stadium from 2014-17.

Manager Andy Hessenthaler spent 18 months at Eastleigh, joining initially as assistant in April 2017, before moving into the manager’s position later that same year.

Inih Effiong is Dover’s top goalscorer with 13 goals so far this season, with Danny Hollands and Tyrone Barnett both tied on 10 league goals at the top of Eastleigh’s league scoring charts this campaign.

For those wanting to wear the same shirts as the players on Saturday, Dover will be wearing their white tops.

DIRECTIONS TO THE SILVERLAKE STADIUM

The Spitfire’s striker headed in Mark Yeates free-kick five minutes from time to level the scores in a match where Athletic had led through a goal in each half from Inih Effiong and Jai Reason.

But It was the worst possible start on Andy Hessenthaler’s first return to the Silverlake Stadium since leaving Eastleigh to become Dover manager as his side fell behind shortly after kick off.

With the game just over a minute old, visiting keeper Mitch Walker pushed away Yeates’ free kick, but Joey Jones passed the ball back into the box for Williamson to fire in from close range.

Cries for a penalty on Jamie Allen were turned away by the referee after Whites’ striker appeared to have his standing foot taken away from him as he shaped the shoot.

But it mattered little as Effiong scores his third goal in as many games on 20 minutes.

Walker was called into action, denying Williamson as the forward run onto Yeates’ pass.

McCallum headed over and following the restart, Lewis blasted over after the ball fell his way 25-yards from goal.

Ben Williamson’s goalbound shot struck Mitch Brundle in the face, but there was no blocking Reason’s fine finish at the other end as the away team went ahead on 54 minutes.

The former Eastleigh man collected Brundle’s pass following a clever free-kick routine and curled the ball away from Stryjek into the far corner of the net.

Eastleigh tried to respond immediately with Reda Johnson’s looping header forcing Walker to tip the ball over for a corner.

Athletic went for a third with Allen and Brundle both seeing shots on target well blocked by the home defence.

Fine play from Josh Passley out wide found Effiong, now Dover’s outright top scorer with six National League goals this campaign, at the back stick to tap in, but the ball appeared to role under the attacker’s foot.

And that miss was duly punished by McCallum, who rose above the Dover defence to head into the bottom corner, though Lokko saw a late header tipped away in injury time.

Earlier, boss Hessenthaler made one enforced change to the side that started at Boreham Wood on Tuesday, with Anthony Jeffrey replacing the injured Joshua Debayo.

The striker cancelled out Ryan Bird’s opener by slotting home from close range just six minutes from time and then headed in a late winner as Chris Kinnear’s men lost at Eastleigh for the first time in non-league’s top tier.

But it was Whites who had the lead midway through the first half.

Giancarlo Gallifuoco released Bird for the striker to blast his 14th National League goal of the season past a helpless Stack.

And Ade Azeez was next to try his luck from range, driving a low effort narrowly wide via a deflection.

Ayo Obileye then went close for the hosts, but could only kick air when trying to connect with Ryan Broom’s accurate cross.

Following the restart, Kevin Lokko, sporting Nortei Nortey’s shirt after suffering a cut to the head in the first half, headed Brundle’s corner just over.

And Azeez needed just a couple more inches to be able to convert Pinnock’s cross to the back post.

The forward, on loan from Cambridge, then blasted wide after getting the better of Cresswell out wide.

Sam Matthews’ volleyed onto the roof of Walker’s net as the home team pushed forward for the equaliser.

And the host’s leveller came courtesy of McCallum with the attacker slotting through the legs of Walker just a few yards from goal following good work from Matthews.

And the Spitfires’ winner arrived as the clocked ticked towards injury time.

Sub Ben Williamson crossed for McCallum to rise above the Dover defence and head past Walker’s despairing dive to complete his brace.

Earlier Kinnear made one change to the side that started in Saturday’s goalless draw at Barrow.  Bird replaced Keanu Marsh-Brown, who started as a substitute.

WHITES WIN AWAY AT EASTLEIGH

STRIKER Ross Lafayette returned to haunt his former club Eastleigh as Dover claimed all three points with a stunning 4-2 win in Hampshire.

It was also the second successive game Dover beaten the big-spending Spitfires at home after last October’s 5-2 thumping.

After a goalless first half, Dover opened the scoring with an embarrassing own goal from on-loan Arsenal goalkeeper Ryan Huddart seven minutes after the restart after he somehow palmed a cross from Chris Kinnear Jnr into his own net.

Lafayette’s header doubled the advantage eight minutes later to stun the home faithful at the Silverlake Stadium.
It was his second goal since moving to Crabble following his strike on Saturday.
Lafayette then had a goal disallowed for offside before Moses Emmanuel fired wide and Huddart denied Jim Stevenson.

Eastleigh pulled one back through ex-Portsmouth man Ryan Bird with nine minutes to go and five minutes later they were level after Andy Drury slotted home from close range.

But Dover were not about to be denied and restored their two-goal advantage through Jim Stevenson and substitute Ricky Miller.
Miller started from the bench following his one-game suspension for his red card against Boreham Wood.