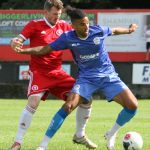 The midfielder slotted in to cancel out Anthony Cook’s penalty after Nassim L’Ghoul gave Dover an early lead.

The visitors made the perfect start when L’Ghoul smashed in the opener from six yards with the match only three minutes old.

Yusuf Mersin then reached down low to deny Anthony Cook from an angle.

The striker headed Josh Passley’s cross downwards, but Wilks stopped the ball from crossing the line with his legs.

Julian Anau then headed off target when well placed at a corner.

There was plenty of drama straight after the restart.

Sub keeper Lee Worgan made a stunning one-handed saved to deny Montel Agyemang from point-blank range, but looked resigned to losing his clean sheet with Josh Oyinsah following up, but United’s striker somehow blazed wide with the goal at his mercy.

L’Ghoul curled inches wide of the target but the National South side levelled on 63 minutes from the spot.

After being fouled in the box, Cook picked himself up and sent Worgan the wrong way from 12 yards.

Athletic searched for a winner which duly arrived four minutes from time.

Gobern slotted in Bobby-Joe Taylor’s pass  add to his goal against Maidstone United earlier in the week.

Dover next host League One Gillingham on Tuesday 23rd July.  Kick off 7:45 pm. 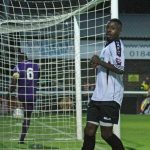 Dover extended their pre-season unbeaten run to five matches with a win against National League opposition.

Oscar Gobern headed the hosts in front before the break with subs Kurtis Cumberbatch and Steven Rigg adding further goals in the second half.

Inin Effiong was sent tumbling in the box by Chris Lewington, but the referee ruled in favour of Maidstone’s keeper.

Effiong slid in Jack Munns pass, but the striker’s celebrations were quickly cut short by the linesman’s flag.

Stones first chance fell to Ayuk five minutes before the break, but the playmaker blazed Iffy Allen’s pass high into the sky.

Hakan Hayrettin’s men were punished for that miss as Dover went ahead on 44 minutes when Oscar Gobern powerfully headed in Bobby-Joe Taylor’s corner.

There was still time for another Athletic chance as Effiong was off-target from a trialist’s run and pass.

Whites next travel to Welling United on Saturday 20th July for their sixth friendly of the campaign.

Effiong was nearly on target after the restart, but smashed the ball just past the stanchion with sub goalkeeper Jake Cole to beat.

Munns went even closer to doubling the hosts lead, striking the foot of the post from the angle.

Dover made it two goals with no reply on 71 minutes when sub L’Ghoul pounced on some defensive hesitation from Maidstone to slip in Cumberbatch to cooly slot into the bottom corner on his home debut.

Sub Josh Passley then strode forward from right-back, only to see Cole turn his wicked shot past the post.

But the home side were not quite finished as Rigg curled delightfully past Cole moments before the final whistle.

Whites next travel to Welling United on Saturday 20th July for their sixth friendly of pre-season.

Whites continued the pre-season preparations with a comprehensive win on Saturday with Inih Effiong, Will De Havilland, Alfie Pavey and Nassim L’Ghoul on the scoresheet.

Steven Rigg had the ball in K Sports’ net early on, only to be ruled offside, while Effiong was unable to convert Josh Passley’s low cross.

Rigg twice more went close, seeing a header well saved and then striking the post after smartly turning in the box.

But his strike partner made no mistake with the opener just before the break.

Effiong beat the home offside trap to net his third goal in as many friendlies.

A much-changed Dover side after the break then set about putting their Southern Counties Eastern League opponents to the sword and doubled their lead within minutes of the restart when De Havilland tapped in at the far post.

A trialist added a third and Pavey took advantage of a goalkeeping error to make it four with no reply on 72 minutes.

L’Ghoul’s diving header from Ricky Modeste’s pinpoint cross added shine to the scoreline and the midfielder was not finished there.

The Frenchman was fouled in injury-time and converted the spot-kick himself, sending K Sports goalie the wrong way.

Inih Effiong’s stunning finish ensured it was honours even on Tuesday night.

Dover’s striker smashed Ricky Modeste’s volleyed pass into the top corner to cancel out an early penalty from the Southern Counties Eastern Football League side as Andy Hessenthaler’s side made it three pre-season matches unbeaten.

Though it was Whites who could have taken the lead from the spot with the game just a couple of minutes old following a foul on a Dover player.

Jai Reason stepped up, but skied his penalty and it was the hosts who took the lead from 12 yards on 11 minutes.

After referee Gerry Heron spotted a handball in the area by a Dover player, Yusuf Mersin was sent the wrong way.

Nassim L’Ghoul and Ricky Modeste both fired narrowly off target for the visitors before Effiong struck in style and Dover went close to having a half-time lead.

Scott Doe headed goalwards, only for the home keeper to spectacularly tip the ball over the bar.

A much changed Athletic side were almost stunned after the break when Beckenham struck the post from 25-yards.

Steven Rigg then saw his accurate header cleared off the line and Alfie Pavey curled inches over when well placed.

Mersin was called into action with injury-time looming, stooping low to keep out the home side as the match ended in a draw. 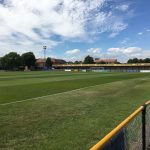 Kevin Lokko’s header cancelled out Jerson Dos Santos’ opener for the host and Inih Effiong had given Dover the lead after the break.

But Callum Davies had seemingly rescued a draw for Invicta, only for Grenadian international Modeste to grab a later winner.

The home side nearly had the lead on two minutes when Dos Santos fired goalwards after rounding visiting stopper Yusuf Mersin, Lokko, sporting the armband for the first time, was on hand to clear the ball off the line.

Kieron McCann then fired wide for Folkestone and a former Athletic player then went even closer for the hosts.

Striker Ira Jackson fired towards the bottom corner, but Mersin punched away the initial effort and the Dover defence then blocked Jackson’s follow-up overhead kick.

Alfie Pavey flung himself at Josh Passley’s cross and that miss was duly punished by the dangerous Do Santos on 18 minutes.

The striker picked the ball up 25-yards from goal and blasted past the outstretched arms of Mersin.

However, the lead only lasted three minutes thanks to Dover’s skipper.

After Roberts and tipped away Pavey’s header, Lokko rose above the Invicta defence to head in the resultant corner from Munns.

Mersin had to scramble to reach Johan Ter Horst’s angled effort and the Turkish stopper then tipped Finn O’Mara’s header over the crossbar for a corner.

O’Mara was then in the thick of the action at the other end, heading Scott Doe’s header from Reason’s free-kick off the line.

Pavey could only look up the sky after failing to put the visitors ahead shortly before the break.

The forward latched onto Michael Everitt’s poor back-pass but missed the target after taking the ball around Roberts.

But Dover made no mistake with their first attack of the second half.

Oscar Gobern slipped in fellow sub Inih Effiong, who tucked the ball past Roberts into the bottom corner.

Bobby-Joe Taylor twice went close, firstly from a free-kick that Roberts tipped over, then crashed a right-footed shot inches wide.

But Callum Davies had no problem with his header on 68 minutes.

The ex Dover loanee stooped to head in Scott Heard’s corner at the far post to level matters.

Hessenthaler’s men were not be denied victory as Modeste grabbed a late winnter.

Whites next travel to Beckenham Town on Tuesday 9th July, kick off 7:45 pm. 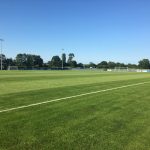 Alfie Pavey’s goal twenty minutes from time saw Whites get their 2019 pre-season off to a winning start on Wednesday night.

The striker slotted in from close range after Andy Hessenthaler’s men were twice pegged back by their Southern Counties East Football League Hosts.

Athletic had twice led through headers from Steven Rigg and a triallist.

Following a strong start, Dover opened the scoring on the quarter-hour mark thanks to summer signing Rigg’s looping header, though the away side were soon grateful to another Whites’ debutant at the other end of the pitch.

Goalkeeper Yusuf Mersin somehow tipped over a top-corner bound effort and then prevented an equaliser, blocking a low drive with his legs.

Jack Munns fired off target just before the break and a much changed Dover side went even closer within seconds of the restart as substitute Oscar Gobern blasted narrowly wide of the mark.

Whites were made to pay for their missed chances and the home side was level thanks to a well-worked headed goal which left Mersin rooted to the spot.

It wasn’t long before Dover were ahead thanks to clever play from another new face.

Frenchman Nassim N’Ghoul, signed at the start of the week, whipped in a pinpoint cross for one of the triallists to head into the top corner.

A cooly converted penalty levelled matters for the hosts, however, L’Ghoul almost fired Whites ahead from distance, forcing the home keeper to tip the ball around the post.

Pavey put the National League team ahead once more and almost grabbed a second, seeing his header from L’Ghoul’s accurate cross well saved.

Hessenthaler’s side next travel to Folkestone Invicta on Saturday 7th July, kick off 3 pm. 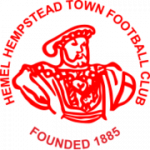 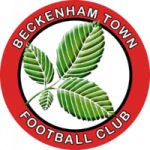 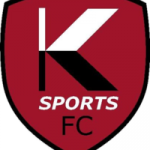