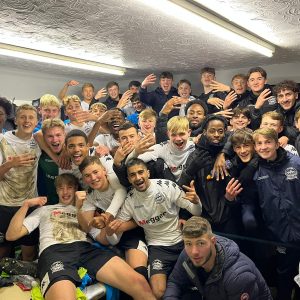 Goals from Leo Dodds, Mohammed Ali, and Archie Hatcher earned their side a place in the Third Round and a trip to Premier League Brighton & Hove Albion.

Manager Mike Sandmann knew who deserved the credit for the fantastic win – his players.

He said: ” I couldn’t be prouder of the players – to a man they performed and limited Lowestoft to few chances.

“We certainly saved our best performance in the competition for this game.

“It’s a massive occasion for the players and a lot of pressure for both teams, but I felt we dealt with that particular well.

“Lowestoft are a good side – you don’t get to this stage of the competition unless you’re a good side, but I felt our performance really limited them on the night.

“We now have the opportunity to travel to Brighton and enjoy the occasion and game against a Premier League side.

“It will be great for our players to compete against them and have the exposure that will come from it.

“The players deserve all the credit they will receive –  myself and staff couldn’t be prouder of them.

“We could also potentially become the only non-league club left in the competition which will speak volumes in itself.” 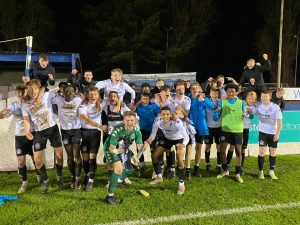 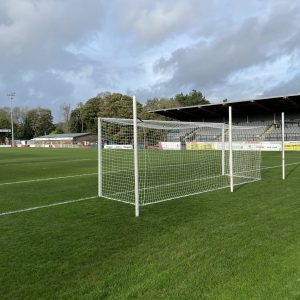 We can now confirm the re-arranged dates of two games.

Our National League South game against Taunton Town at Crabble, which was originally scheduled for November 5th, but postponed due to the Somerset club playing in the FA Cup, will now be played on January 10th at 7.45pm.

The Kent Senior Cup tie at Chatham Town has also been moved from November 22nd to January 17th at 7.30pm. 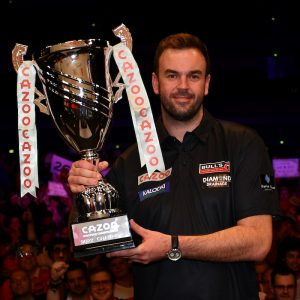 Darts fans will have the perfect opportunity to meet and greet a newly crowned champion at Crabble next month.

Dover Athletic fan Ross Smith won the first major title of his professional career after claiming the Cazoo European Championship title last month and he’ll be bringing the trophy with him when he attends our game against Worthing on December 10th.

Ross, who defeated namesake Michael Smith 11-8 in Dortmund, Germany, will also be signing autographs and bringing a signed competition shirt together with a set of autographed darts to be raffled.

To mark his visit, our matchday programme for the game will include a photo of Ross with his trophy, which will be perfect to use for autographs. 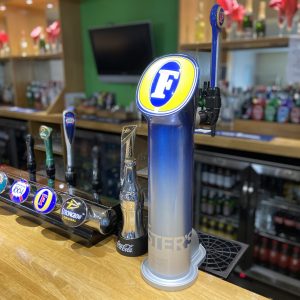 Come along and join your fellow Dover Athletic fans in the Centre Spot at Crabble to cheer on England in their World Cup Group B match against Wales on the big screen on November 29th.

Doors open at 5.30pm and pints will be served at a specially discounted price until 6pm before the game kicks off at 7pm.

Food, same as on a normal match day, will also be available.

So put your England Football shirts on, get the flags out and get on down to the Centre Spot to cheer on the Three Lions!! 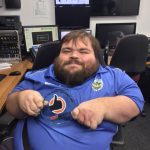 Stefan Milton quietly goes about his work at Crabble each and every match day.

The media team volunteer loves helping the club and plays such a vital role in video editing match highlights and sending them to BT Sport, Scout 7, etc.

It’s a job he’s been doing since October 2016 and he was recognised for his unwavering support for the club by being named a National League Volunteer of the Month back in 2019.

Now we would like to help Stefan, who has Metatropic dysplasia and is wheelchair-bound, in his bid to raise funds for a new electric wheelchair.

He has found a former rental one for £650 which will be suitable for his needs as repairing his broken chair would cost roughly the same amount.

Stefan has set up a fundraiser to help his cause, which you can find HERE so if you can help it would be very much appreciated.

Thank you so very much on behalf of Stefan and the club. 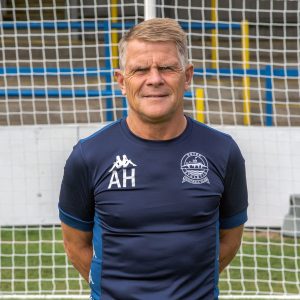 Andy Hessenthaler will be taking charge of his 300th game as Dover’s manager in the National League South game against Chippenham at Crabble on Saturday.

Whites, unbeaten in their past two games following a win at Bath City and a draw at Chelmsford City last Monday, host a Chippenham team heading to Kent after expereinces the highs and lows of the game within a week.

They beat League One side Lincoln City 1-0 to reach the FA Cup Second Round for the first time in their history last Saturday before losing their National League South game at Cheshunt 3-2 on Tuesday, a game they led 2-0 at half-time in.

It was the Bluebirds fourth consecutive league defeat and it saw them drop into the bottom four.

You can read the Chippenham preview HERE

The 13th really did prove to be an unlucky number for Dover as the Whites missed two penalties as the points were shared in the Southern League Premier Division clash.

Matt Carruthers beat the keeper with his penalty kick but the effort crashed against the bar after 34 minutes.

In the 72nd minute, Chippenham defender Simon Charity handled in the box to gift Dover a second penalty.

Lee Spiller took over the spot-kick duties – but managed to blast the ball over the top.

Defender Myles Judd and leading goalscorer Alfie Pavey are both back in the matchday squad after missing the draw at Chelmsford City on Monday through suspension. 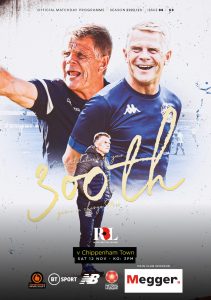 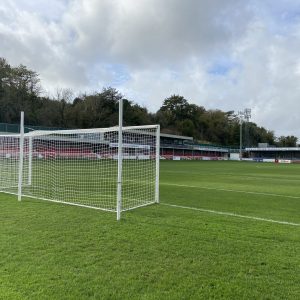 Our National League South clash against St Albans at Crabble has had its kick-off time changed from 3pm to 12.30pm.

The time for the December 3rd match has been brought forward in order to avoid a potential World Cup clash.

One of either England or Wales may feature in the last 16 games at that time. 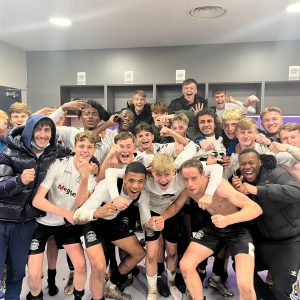 Our Academy played their way into the history books after they beat Langley FC 3-2 in the FA Youth Cup First Round proper tie at Crabble on Tuesday evening.

Archie Hatcher, Leo Dodds, and Joel-Michael Oderian scored the goals which saw the team become the first one to reach the Second Round for the first time in the 12-year history of the Academy.

Manager Mike Sandmann’s team will now head to Suffolk to play Lowestoft Town in the Second Round.

Not surprisingly, Sandmann was full of praise for his talented youngsters.

He said: “What a great achievement and what a fantastic performance – I couldn’t be prouder of the players.

“Langley played their part and were a good side with some very good individuals and we knew that coming into the game.

“We showed great character after missing the penalty and the players didn’t allow it to affect them, which is important.

“I felt we could have been in front by more at half-time but you have to give Langley credit for making it difficult.

“Heading into the final 10 minutes with only a one-goal lead was always going to be nervy, but I thought we limited them to very few chances and defended well as a team.

“As the manager, I’m always going to be looking to improve, but I don’t want to take anything away from the players – they were excellent and have made history getting to this stage, and let’s see where it takes us.

” I would also like to thank the fans who came to watch, so thank you so very much for your ongoing support of the Academy lads – they do really appreciate it.” 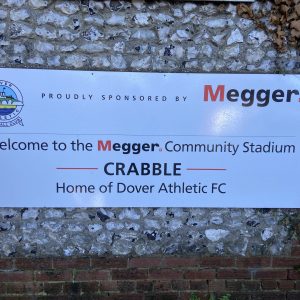 Dover Athletic Chairman Jim Parmenter provides us with an exciting update on what’s been happening behind-the-scenes at the club.

For some weeks now I have been developing a new community strategy for the Club and can now update our Supporters and the wider community of our plans which have been formulated in conjunction with our main sponsor Megger, who have been fantastically supportive of our plans, and you will hear more about their involvement and support in due course.

I have been in positive discussions with the Kent County FA and Dover District Council about a project to convert our old training pitch behind the River End Stand to a 3G pitch exclusively for community use.

We have already started to discuss the matter with the youth football community and the feedback has been very positive indeed.

The time has now come to consult the wider community and our neighbours on the project.

So any person or organisation who has an interest in using the facility and would like to add their support to the project please contact me at jim.parmenter@doverathletic.com

Equally, if any of our neighbours have any questions or concerns I would be happy to meet with them at the stadium and explain the project.

To be clear, the facility will be designed for small-sided games up to 9 a side with an option for two 5-a-side pitches on the same area.

Our emphasis will be on Community engagement particularly mini-Soccer, Youth football, Futsal and walking football.

We will be continuing with our excellent Saturday morning “Happy Feet” project.

Our emphasis will be to reach out also to members of the Community with disabilities and diverse ethnic backgrounds as well as developing women’s and girls’ football.

So please, if you have an interest in the project or any concerns do not hesitate to contact me.

Thanks to the support of our friends at Megger we are able to bring a colleague into the team to drive our community activities.

We will be embarking on a diverse programme within the Community (sporting and non-sporting) and whilst football will form an important part of our community activities, they will by no means be exclusively football related.

More details will be published soon.

So in the meantime, I would like to send my best wishes to everyone and I will continue to keep you all updated.