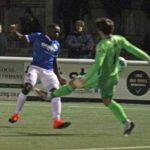 NOVEMBER saw Dover take maximum points on offer in the Vanarama National League, with four wins and 12 points to take the side one point ahead of Dagenham and into the play off positions.

The other fixtures saw Whites go toe-to-toe for more than 200 minutes of football against League Two side Cambridge United over two Emirates FA Cup games.

On a bitterly cold afternoon at the beginning of November, Dover travelled to League Two side Cambridge United to battle it out for a place in the 2nd Round of the Emirates FA Cup.

Cambridge had the better of the first half and created some great chances, but couldn’t put them away. However, eventually their pressure paid dividends and a shot from Berry was spilt by Dover goalkeeper Walker and Mingoia was on hand to eventually score to see Dover behind at the half time whistle.

Dover came out a different side in the second half, with Dover hitman Ricky Miller receiving more of the ball and Dover began to create serious chances to level the game up.

Both sides knew that the next goal would be crucial and Cambridge almost made certain of the game when Ikpeazu was found through on goal by a Mingoia pass, but with just Walker to beat, the towering Cambridge striker couldn’t direct his shot on target.

Dover grabbed a 82nd minute equaliser when top-scorer Miller smuggled the ball into the goal following a Lafayette cross, sending the ever-singing Dover fans into jubilation.

Cambridge were made to rue their poor finishing as Miller’s goal was enough to force a replay at Crabble.

Dover returned to league action the following Saturday away to Solihull Moors, a team that last time out had earned a credible 2-2 draw away to Yeovil Town in the FA Cup.

Affairs began well for Dover, with Miller seeing his shot rattle the crossbar. However, Whites soon found themselves a man down after just 26 minutes when Jack Parkinson slipped over while trying to deal with a pass back and fouled the Solihull forward while getting back on his feet, leaving the referee no choice but to send the Dover man for an early bath.

Moors would then go into half time a goal up a Brown headed home his effort from a corner kick in the 43rd minute. Many would have thought a goal and a man down Dover were a finished side and that Solihull would finish the game off in the second half, but Dover and Miller had other ideas.

The in-form Dover striker levelled things up for Whites eight minutes after the restart by firing the ball hard and low beyond Moor goalkeeper Lewis.

Much to the surprise of the home side, Dover were the team to score the subsequent goal, Miller latching onto a Grimes long ball in the 60th minute before placing his shot for his and Dover’s second.

Miller threatened again after hitting the upright from a free-kick andhe would would cap a fine performance by making it 3-1 with 15 minutes to play.

He took advantage of a loose ball after Lafayette’s effort hit the woodwork and prodded home from close range to complete his third hat-trick of the season and give Dover a two-goal advantage.

Solihull managed to pull back a goal deep into injury time when in the 94th minute but it was too little too late and Dover left with all three points to move up to sixth place.

The following Thursday, Dover hosted Cambridge in an evening kick off live on BT Sport in the replay of their 1st Round Emirates FA Cup tie which ended 1-1 12 days prior.

Dover started defender Sam Magri, who had missed the Solihull game having played throughout both of Malta’s two international fixtures against Slovenia and Iceland.

Both sides put on an improved display and Dover had the first chance of the game after 15 minutes, but Miller couldn’t get his shot on target. Ikpeazu had a chance after being one-on-one with Walker but the Dover goalkeeper showed his ability and blocked his shot.

Cambridge then hit the post following an accurate Mingoia cross. Miller had another opportunity to break the deadlock after Thomas played him through but couldn’t beat the Cambridge goalkeeper.

Ross Lafayette then had the half’s best chance; an in-swinging Modeste cross found Lafayette only yards from the goal and unmarked, but the usually clinical striker couldn’t direct his header on target.

It would take until the 70th minute for the game’s first goal to arrive with Miller scoring his 22nd goal in all competitions to give Dover the lead.

Cambridge then hit the Dover crossbar just afterwards and when Roberts had his effort ruled offside by the assistant referee, Whites looked poised to escape with the narrow win.

However, extra time was forced late on in the 91st minute after a shot from a free-kick was spilled and then reached first by Roberts who couldn’t miss.

With Miller having to be substituted with a minor injury before the end of the 90 minutes, extra time then ensued, with both sides facing another 30 minutes and possibly penalties thereafter.

A thunderous shot from Thomas following a corner kick in the 102nd minute of play made it 2-1 to Dover and gave Whites the belief that they could be victorious.

The ball fell to the Dover left-back who struck the ball on the volley with such power and skill that the Cambridge defenders and goalkeeper could barely move before the ball had slammed into the back of the net.

Unfortunately for Dover, Cambridge would equalise for the second time of the night just eight minutes later after captain Legge headed into the net from a cross.

It looked as if the tie would have to be settled by penalties until the 118th minute of extra time when Elito slotted home from an angle to give Cambridge a 2-3 lead.

Dover tried to go more attacking to save the tie but were caught on the counter attack and conceded again two minutes later when substitute Williamson fired Cambridge into the 2nd Round.

It was heartbreak for Dover and their fans, having only been behind a total of 2 minutes out of the 120 played.

Whites can find solace in the fact that they took League Two Cambridge all the way and gave all they had in an exciting game that was broadcasted worldwide.

Dover’s attention turned to the visit of Guiseley in the National League just over 40 hours later.

This game was a special occasion for the Club, fans and local community as it was the official opening of the brand new £1.3 million Family Stand, something that showed the club’s ambitions for the future.

Just over 3000 people came to see the inauguration of the new stand and watch a Dover side try and keep up the pace with the play off pack.

The rain poured down as Dover named five changes from the FA Cup tie and although the first half didn’t prove fruitful Dover’s dominance was there to be seen.

Whites got that crucial goal to lift the spirits of the players and crowd in worsening conditions when a 46th minute Miller run resulted in a shot and confusion as to who got the final touch on the ball’s way in; both Miller and Emmanuel claimed it.

Emmanuel more or less put the game to bed three minutes later when Stevenson saw his shot blocked and Moses was there to slot the ball home.

Dover could have scored more and put in a promising performance in front of a large crowd at Crabble in very wet conditions as the game ended 2-0 to the Whites. Dover remained in 6th, just a point behind Barrow in 5th.

The following Tuesday saw Woking come to Crabble, off the back of a solid 3-0 victory away to Dover’s local rivals Maidstone United.

With Miller suspended after picking up a fifth yellow card of the season against Guiseley, Lafayette came in to lead the attack.

The team from Surrey crossed ball after ball into the Whites’ area but the Dover defence kept the Cardinals out.

Emmanuel had a chance to score following Lafayette’s free-kick but fired over from 10 yards out.

Lafayette then made it 1-0 in the 20th minute when he headed in following a deep cross from Pinnock from the left touchline.

Arnold saved well from Woking striker Ugwu after he was accidentally played in by a weak backpass from Grimes and the Dover shot-stopper was called into action to palm away a Saravai volley.

It was Dover who would score the next goal, with Emmanuel scoring just a minute into the 2nd half. Sammy Moore had a shot which Lafayette wasn’t able to control and Moses was in the right place at the right time to prod home to make it 2-0 to Dover.

Dover soon found themselves three goals up after Grimes looped in a long ball from a set piece, which Lafayette was able to control and slot in for his second goal on his birthday.

Although Woking then got a goal back 14 minutes after, Dover looked in control for most period of the game and recorded a third straight win in the league. Dover remained in 6th but still within touching distance of the play offs.

Fog caused the game to called off in the second half with Dover 1-0 down.

Dover travelled to Sutton United in November’s final fixture, hoping to make it four out of four wins in the League this month.

Dover made the perfect start in the seventh minute through Miller, who scored his 20th in the League with a powerful header from a Magri cross.

Sutton then had a man sent off for a deliberate elbow in the 23rd minute which meant the home side faced an uphill battle in the remainder of the game.

Emmanuel put the Whites into a two goal lead after 32 minutes after collecting Lafayette’s flick-on to race clear and finish expertly.

Dover were in rampant mood and Lafayette made it 3-0 just four minutes later after placing his shot through the legs of the Sutton goalkeeper.

Whites would go into half time with an almost unassailable 4-0 lead, with Emmanuel getting his second after he beat the offside trap and Worner in the Sutton goal.

Following the restart, it didn’t take long before Emmanuel had his hat-trick and the skill to beat both defender and goalkeeper before deftly finishing was deserving of a third goal.

With 73 minutes on the clock, Miller completed the rout when he beat the full-back and smashing his shot into the far corner of the goal to grab his second and 21st League goal.