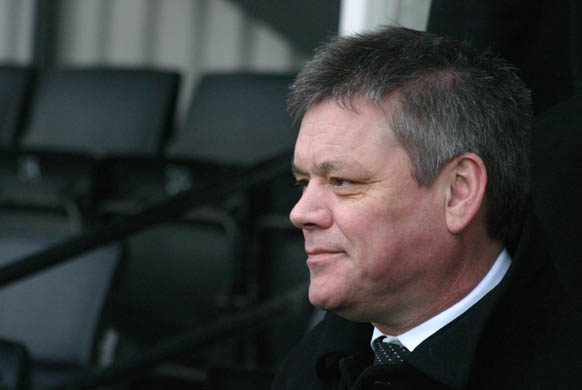 *BS*CHAIRMAN Jim Parmenter is expecting a crowd of more than 2,000 for the battle between two Kent clubs back on the up.

*BF*Whites and our old friends from Maidstone have had to endure troubled times – but both towns once again have senior teams that are challenging for honours.

The season Dover were promoted to the Conference in 1993, Maidstone, along with Dartford, went bust in a well-documented sucker blow to Kent football.

Dover have managed to survive huge problems of their own in recent seasons – although that has come at a cost: three relegations have seen the River End faithful have to adjust from watching the likes of Rushden, Woking and Yeovil to enduring life in Ryman One South.

But, ironically, it is Whites, Dartford and Maidstone who are at the top of the table battling it out for two of the available promotion places.

And Maidstone coming to the East Kent coast has already got the town buzzing.

Jim said: “This is a massive game for both clubs and the kind of game we love to stage at Crabble.

“The Stones have excellent support and will bring down a huge number of fans. It should make for an excellent atmosphere and we’re expecting a crowd of around 2,000 for this one.

“Hopefully, the fans will see a good match – but with the three points staying in Dover. However, it’s a tough game – and one that Maidstone will be every bit as desperate to win too.

“At the end of the season, the points up for grabs on Saturday could prove crucial with things so tight at the top of the table.”

Jim was quick to pay tribute to Stones chairman Paul Bowden-Brown for his plans to go it alone with plans to build a new stadium in Maidstone after backers pulled out.

He said: “The stadium might not be as flash as first hoped but Paul deserves enormous credit for going ahead with getting the Stones back to Maidstone.

“He is clearly ambitious and wants to get that club back up the ladder – and this is another step in that journey.”

Jim described Tuesday’s 4-1 defeat at Tooting and Mitcham as “unacceptable” and will, like all Dover fans, expect a positive response at Crabble.

He said: “The form has pretty much been the same throughout the season. Terry White has maintained the kind of form we were on before Clive Walker had to take sick leave.

“We are still in a strong position – top of the table – and it’s up to the team to keep us there. Hopefully, we’ll still be there at 4.45 on Saturday.”

Meanwhile, Jim has confirmed the game will *BS*NOT *BF*be segregated.

He said: “There are no safety concerns and relations between the two sets of fans is good.”