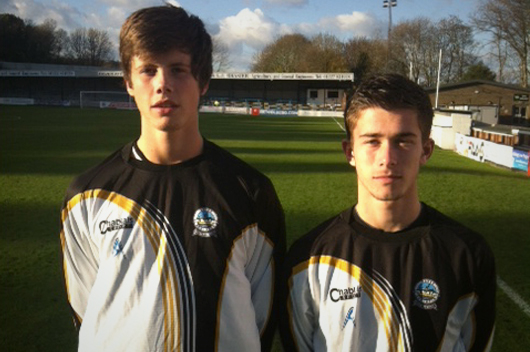 *BS*Two of the club’s Academy team are heading for Spain on Monday to represent England Schoolboys against Valencia and Alicante.*BF*

Lloyd Harrington (above left) and Tom Axford (right) have been selected again after playing 90 minutes in a 0-0 draw against Australia recently.

Both players featured for the first team against Welling in the Kent Senior Cup last month. Both capable of playing in different positions, they have been given squad numbers 2 and 5 for their International duty.

The pair enjoyed their first International experience with England being held to a 0-0 draw against Australia, an experience which will undoubtedly stand them in good stead for the future.

*Ppic1*Tom Axford said: “The whole weekend was something I will remember forever, the feeling of singing the national anthem was very special and I can’t wait for Spain.”

Lloyd Harrington said: “Walking out of the tunnel to hundreds of people was very special and got me really focused for the game. The general atmosphere about the camp was buzzing and it was exciting to be a part of it.”

The pair will be flying to Spain on Monday for a week to represent England, taking part in a training camp as well as playing against Valencia and Alicante. Then next game after that will be on March 2nd against Wales.

Academy boss Michael Sandmann said: “We wish the pair well in their tour of Spain and I know they will continue to learn and develop as players, producing some more excellent performances.

“When they return from their travel I believe the experience they have gained will have a positive effect on the rest of the Academy.”