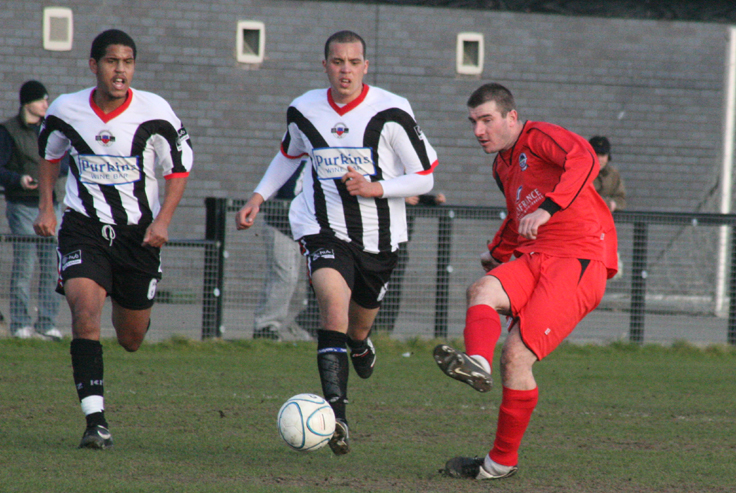 *BF*Pouts is a key player in Andy Hessenthaler’s squad and proved that with a superb goalscoring performance in the 5-2 victory at Crabble against Steve Lovell’s men.

Hess said: “Alan’s performance showed what a good player he is. I was always confident he’d sign. It’s dragged on a bit but he agreed on Friday night to sign a new deal – and he’s put pen to paper.

“He’s not just a good player out on the field, he’s a great person to have around the squad. He’s a big help to Darren Hare and myself in the dressing room.

“We’ve got a lot of good young players but it’s important to have experienced men guiding them. John Keister and Alan are very good in this department and are key men for us.

“More or less that’s us nearly done now with signings. We just want a centre forward. I’ve a couple of names that we like the look of but it might not be until the season has started that we actually manage to get some business done.”

The Ashford game was scheduled to be played at Homelands but flints covered the turf, making conditions dangerous for both sets of players.

So the game was switched to Crabble, literally with just a little more than an hour left before the scheduled 3pm kick-off.

Hess said: “To be fair to Steve Lovell, he didn’t see the pitch himself until lunchtime – and agreed we couldn’t play on it.

“But we got the game on – that was the most imporant thing – and it proved a great exercise for us.

“I was disappointed with the two goals we conceded, both at the start of each half. Very sloppy from us.

“When you consider, we’ve let in as many goals today as we did against Charlton and Dagenham combined, it tells you the story.

“Apart from that, I thought we were good at the back today and was delighted with a number of performanaces. We’re shaping up nicely.”