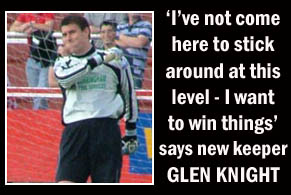 Knight, 31, is a vastly experienced stopper and formerly played for Welling United when they were a Conference club and also in the Dr Martens League Premier Division.

He is 6ft 4in tall, has a reputation for commanding his area well and making himself big in one-on-one situations. Knight is widely regarded as one of the best keepers outside the Conference.

Knight – who has put ink on a two-year contract – joins just a few days after Whites raised a few eyebrows by snapping up experienced midfielder John Keister, 35, from Margate.

Now the club are in the market place for one or two young exciting prospects to further bolster what is beginning to look a useful squad.

Chairman Jim Parmenter said: “That is probably it now in terms of recruiting players over the age of 30. We feel that we’ve got a lot of experience in the side and want to combine that with some young prospects. So we’re now turning our attentions to getting two younger players in.

“Manager Clive Walker wants to have quality across the pitch and get the right combination to give us that winning mentality. We’re happy with our first two signings so far – and hopefully there’ll be a couple more being announced soon.”

Clive said: “Glen is a top class keeper. He has had to drop down the leagues to come here and I’m delighted that he made that decision. I think he’ll be great here and it’s an area we had to strengthen with Darren Smith our only other keeper on the books. It now means we’re well covered in the goalkeeping department.

“I think we need some pace around all these experienced lads now and that is what we’re looking at. It’s specific players in specific positions we’re after.”

Glen revealed exclusively to doverathletic.com that he would not have dropped down the leagues for any other manager and that it was not an easy decision for him to make.

He said: “I’ve never played down at this level before and have been either in the Conference or at Conference South level. I just feel that Dover Athletic are a special exception. It’s a great club. I know that because I’ve played down at Crabble enough times.

“It’s unbelievable that this big club is playing in Ryman One. It was only a couple of years back that I came here with Welling for a Dr Martens League Premier Division match.

“Obviously I remember our Conference games against Dover as well. The one thing I’ve always liked about Crabble is the fans and it’s a proper football ground as well. I’ve obviously been on the receiving end of some stick down here but it was always just a bit of banter, good natured stuff. Now we’re all on the same side!

“The support for the club is amazing. I am used to playing home games in front of 200 fans, when I was at Thurrock, and that was when we were just a couple of points from the top of Conference South!

“To see Dover averaging around 850 at this level after all their problems shows how great these fans are – and I think the club has a very good chance of getting promoted next season.

“I told Clive that I am only coming down here to win things. I don’t want to drop this far down the pyramid to stay. Hopefully, next summer, I’ll only be one level down and eventually back to the level I was at.

“It was a decision I thought long and hard about. I had three or four other offers and Thurrock wanted to keep me too. All the offers had pros and cons – but Dover are a big club and the only problem I had was the level the club was playing at.

“But I know Clive and the club – and thought I’d go for it. Now I can’t wait for the season to start.

“I’m a player who likes to prepare properly for games. I don’t go out the night before matches and I eat the right things. After doing all that preparation work, it’ll be great to run out in front of a big crowd and to be part of a successful team. That’s why I’m down here and, looking at the squad, I think we can do it.

“The midfield of John Keister, Danny Chapman and Lee Spiller would be better than a lot in the Premier Division, even Conference South. Very strong. Jimmy Dryden and Craig Wilkins know where the net is and Clive says there are some good youngsters here too.

“Hopefully this will turn out to be a great move and Dover can be successful.”