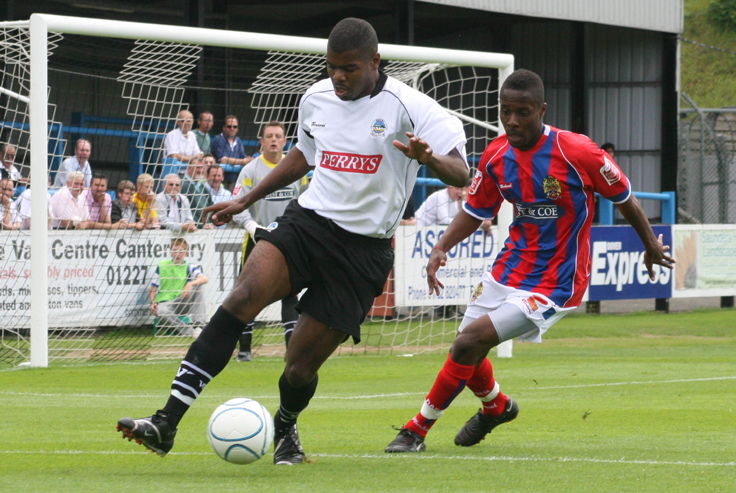 *BS*NATHAN BAILEY has penned a one-year deal with Whites after impressing Andy Hessenthaler in the pre-season friendlies.

*BF*The former Reading striker is not the last of our signings, promised chairman Jim Parmenter, who added: “There is money in the pot for one, perhaps even possibly two more players.”

Boss Hessenthaler said: “Nathan’s got a lot of pace with much to learn in the game. We believe we can make him a much better player.

“He’s at that stage where he needs to get his career back on track and now has a year with us – and in that time we’re hopeful of bringing him on because there’s a lot more to come from him.

“We still need another striker. I am looking for a target man – someone who will compete with Shaun Welford for that position. We’ve got Frannie Collin and Nathan, along with Lee Browning, to play up front – but we need a big and strong player to lead the line as well.

“I’ve told the chairman the kind of player I want to bring in – and he’s said there is money to get him, so we’re working on that now.

“Competition for places is there now. We’re going to have a very strong bench in the Ryman Premier, which is something we felt that was going to be important. Darren Hare watched a lot of Premier games last season – and that was his main observation.

“Of course, some players will not be happy and may want to move on. That’s my problem as the manager. But everyone is going to have to perform on a regular basis to keep their place in the side. That’s healthy and important for any successful team.

“We’re strong across the park. Up front we just need that extra player, midfield is strong and defensively we’re good. I’d not have taken Dagenham’s two centre halves over ours on Saturday. Their manager John Still was very impressed with us.”

Alan Pouton is expected to make a decision about his future this week and Hess said he was hopeful that the playmaking midfielder would be staying at the club. Talks will continue with the former Gillingham star tonight when Whites entertain a full-strength Charlton side – a match which should attract a 2,000-plus crowd to Crabble.

Addicks boss Alan Pardew is a friend of Hessenthaler’s and the Whites chief said: “Alan’s done me a few favours down the years. He brought a full-strength West Ham team to my testimonial at Gillingham and he’s done the same tonight at Charlton. I owe him a few beers.”

He said: “As from next week, it’s a fitting job. Of course, there is still time for hold-ups but we keep our fingers crossed that everything continues to run smoothly.”