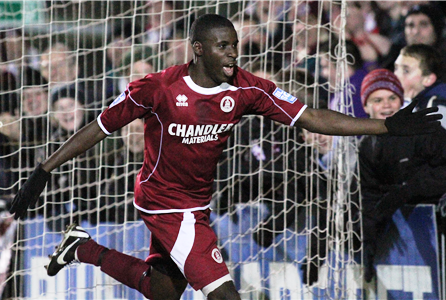 *BS*New signing Michael Bakare is confident he can start the season with a bang and help the team compete for the title.*BF*

Having returned South after spells with Macclesfield and Southport, Bakare was excited to have signed for Dover Athletic:

“I got the phone call last month from Chris Kinnear saying he had watched me at the end of the season and wanted to sign me.

“Dover is a big club and the fact that the manager told me he wants to win the league was the main thing for me.”

He added: “I was living in Manchester before, but now I am back in London and am 110% happy to be back down South. I’ve not made the right moves in the past due to a lack of guidance, but I believe this is definitely the right move for me.”

During his career, Michael has not always been a regular starter or played in his favoured position as a striker which is something he is looking to rectify this season: “Chris has told me he wants me up front. Because I am left footed, managers have played me at either left back or on the wing, which I’ve never minded as I wanted to get into the team and play football.

“When I was at Bishop’s Stortford, towards the end of the season all the strikers were injured and so the manager at the time stuck me up front as I was quick. I scored in the next few games and was told I’d be up front the following season.”

Despite having setbacks, Dover’s new hitman is not short on confidence and has set himself a target of 35 goals for the season: “I believe that if I play, I will score. The season I started as a striker for Bishop’s Stortford I had scored 18 goals in the Conference North by January before I moved to Macclesfield. I’m an all round striker, I’m decent in the air and can use both feet.”

*Q1*Michael is excited at the prospect of partnering former Ebbsfleet striker Nathan Elder, who has also joined Whites this summer: “I don’t know him personally but played against him for Southport and he was a beast in the air, which can only be good for me.”

With both strikers renowned for their goal scoring exploits, Bakare welcomed the competition: “If we are both scoring, it means the team are probably winning. The team is the most important thing and everyone playing should be looking to score.”

With pre-season training due to start on Saturday, Michael is clearly itching to get going: “I have not had a proper pre-season for a while and it really helps me with my fitness and sharpness. The last time I did pre season training, I started the season really well and it will give me a chance to achieve my high expectations for the season.”

He also added on the prospect of meeting his new team-mates: “Every time I have joined a team I have not known anyone but at Dover I know Ricky Modeste, Michael Kamara and Moses Ademola already.”

Still only 26, Bakare maintains the professional approach to football that he learned playing in the Football League: “Signing a pro contract with Macclesfield was special for me at the time. Having never played for an Academy team, as my parents wanted me to focus on education and also going to college and university, it was good to show people who were asking why I was still playing football that I could still make it.

“Even though I am part time, I still train full time and see playing football as my profession. It is such a privilege to get paid to do what is effectively your hobby.”

In addition to his professional mentality, Bakare also coaches children between the ages of nine and 18: “I try to help develop their skills rather than train them to just win competitions. It’s good to give back and I will be a Level 3 coach by the time the season starts so I can hopefully move into management in the future.”