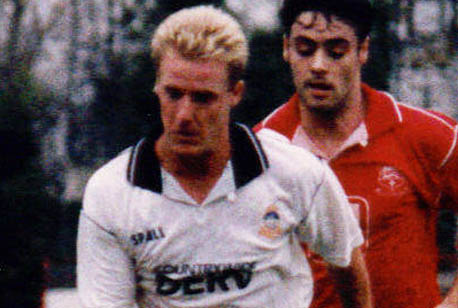 *BS*I’D just got back to the UK from a holiday in the Czech Republic when I heard about Barry Little’s death.

*BF*It was, probably, one of those deaths that most of us remember in some detail. I suspect a lot of DAFC fans will know exactly where they were and what they were doing when they heard about it.

Barry Little’s passing had been expected for some time. It was no surprise to hear about it when I got home in that late August or early September of 1994 but I spent several days walking around through a misty haze wiping the odd fleck of moisture from my eyes every now and again.

My wife never met him but she had heard a lot about him. The day after the news came through we stood, side by side, on a dark evening, staring at our images in the kitchen window, finishing the washing-up and fighting back the tears.

Barry worked with me on the Gateway Hospital Radio broadcasts for a while and I know that his sharp south London accent was a popular addition to the match commentaries.

I realised that there was something wrong with Barry some time before the diagnosis of a brain tumour was made public.

I was not entirely surprised when the information moved into the public domain.

Barry said to me once, “I don’t care where I play in a team. I just want to be out there playing football. I don’t care if it’s up front, in the middle or at the back.”

It was while he was playing either “in the middle” or “at the back” that the possibility of illness or, at the very least, of some undisclosed head injury became apparent to this match commentator.

For several weeks at least whenever Barry went up to head a long clearance back towards the opposing goal he jumped too early.

His jump carried him well ahead of the falling ball. There was never any intention for the head to make contact with the ball.

*Q1*From where I was sitting in the Crabble Press Box his tactic seemed obvious.

Amazingly (at least, to me) nobody else seemed to notice it.

Later, after Barry had finished playing, I questioned him about it wondering if I had, in fact, been imagining things.

“No,” he said, “You didn’t imagine it. It was so painful to head the ball I had to duck out. I’m amazed that no-one else seemed to notice as well.”

Barry, as his former Whites team-mate Russell Milton told me, always had an answer for everybody.

His mind was sharp; he was the street-wise south Londoner.

One evening in the 1992-93 season Dover were playing at Crawley Town in the Beazer Homes League Premier Division. The match was played on Tuesday, January 19, and was to be Dover’s first defeat of that campaign, losing 2-1 (following a 0-0 Crabble draw with Crawley earlier in the season). Barry was called up to take a corner.

“Get on with it you little tw*t,” yelled a Crawley fan, leaning over the advertising hoarding, near the corner spot.

Barry looked up with a half smile, half sneer on his face.

“Did you pay to get in here tonight?” Barry demanded of the fan.

“Course I did,” came the reply.

“Who’s the tw*t then?” sneered Barry as he settled down to take the corner.

The news that Barry had developed a brain tumour was devastating.

*Ppic1*But, typically, he faced up to the illness with the kind of courage and fortitude that characterised his football.

In one of my several visits to their house in Greenwich, June was proudly showed me the football shirts that Barry had exchanged with opposing players after his games for the England Youth team.

At that time, they were carefully folded in suitcases under Barry’s bed.

June pulled one out to let me look more closely. It was bright red and embossed on the front with the Cyrillic letters of the Union of Soviet Socialist Republics. There was a hammer and sickle emblem high on the chest.

“He’s got piles of these shirts tucked away,” she added as though he was still with us, sitting in the lounge, perhaps drinking coffee and reading the paper.

Barry spent many evenings and weekends, while he still could, raising money for cancer research.

One Friday evening he phoned me.

“Sorry Roger,” he said, with his typical chuckle in the background, “I can’t make the match tomorrow. I’m fundraising. There’s a fete on and I’m involved.”

*Q2*Towards the end of the 1993-94 season Barry’s memory started to weaken as the tumour took hold and it was to manager Chris Kinnear’s eternal credit that he retained Barry on the club’s playing staff until the end.

Chemotherapy had helped to retard its growth for several months but he knew that the effect of that treatment was only ever going to be short term. In the end, the tumour would win.

Several times he would start to make a critical point on air. He would bring the confidence of his tremendous football experience to bear and then, after a few moments, forgot his point or forgot the name of the player to whom he was referring.

Early on, though, he became famous for his one-liners:

“More referees bring the game into disrepute than any tw*tting player.”

“How can you play football when the tw*tting ball’s 30 feet up in the air?”

Valiantly though, he battled on.

I was abroad when the friendly matches that started the 1994-95 season began.

Predictably, Barry was at Crabble.

In the Centre Spot bar one day, former director Chris Harman asked Barry if he was looking forward to commentating on the league matches that were about to begin.

Apparently (and I have this on good authority), Barry said, “I’d love to Chris but the doctor’s told me I haven’t got very long left.”

*Lpic1*My telephone rang the day after I arrived back in the country.

It was the news that I had been expecting and fearing for some time.

I had hoped that Barry would be granted some time to see at least some of the new season but it was not to be.

For all of us who were there, the funeral was an ordeal. It was, also, a public show of support when most of the population of Greenwich turned out to bid farewell to one of its own.

Andy Stevens, a Dover fan and sports editor of the East Kent Mercury at the time, sidled up to me at the cemetery as they laid him to rest.

“Not bad away support,” muttered Andy, whose eyes were as red raw as mine must have been.

There were, at least, several hundred people crowding around the open grave with its simple but effective polished wooden cross.

Many people from Barry’s past were brought together that day.

It could only be in this context that I would ever get the chance to exchange a few words with his old Charlton Athletic manager, Alan Curbishley.

Famous names in football, too many to list, were everywhere that day. Their presence was a reminder of the talent that we had lost.

I still miss Barry Little both as a player and as the friend he became for such a brief period.

I’ve often wondered if he might be granted some time off for good behaviour to help the Whites out of their current predicament.

There are two people who, after their passing, brought a smile and a chuckle through the sadness as I remembered their witty comments. One was Brian Clough and the other was Barry Little.

Not a bad epitaph that.