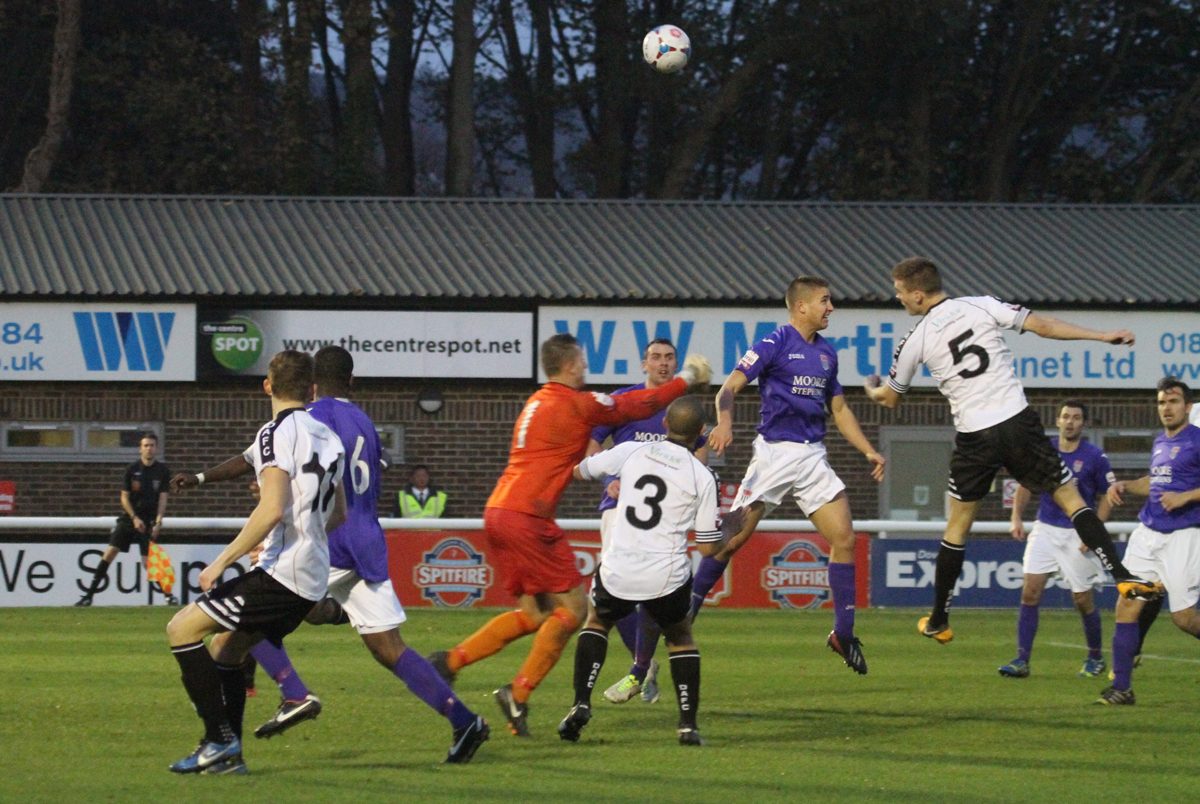 *BS*Dover Athletic welcome Bath City to Crabble on Saturday, with both sides in the hunt for a playoff place. Whites have already beaten their Somerset opponents on two occasions this season.*BF*

A comfortable 2-0 victory over Maidenhead United on Tuesday night kept Dover within touching distance of the playoffs, with goals from Jeff Goulding and Tom Wynter leaving United just outside of the relegation zone on goal difference.

The goalscorers were notable for their own reasons – Goulding’s 50th minute goal was his seventh in four games for the club, whilst Wynter’s strike shortly after was his first for the club he joined three-and-a-half years ago.

That win means Whites sit in 8th place, three points behind the final playoff spot with games in hand over the majority of sides above them. Saturday’s clash against Bath City is sure to provide a much tougher test than that posed on Tuesday.

The sides have already met twice this season, with Dover coming out on top on both occasions. In September, goals from Nathan Elder and Tom Murphy sealed a 2-0 victory in the league, and two months later a goal from Elder was enough to ensure progress in the FA Trophy.

In addition to the meeting earlier on in the season, previous clashes between the sides in the Conference South have generally gone Dover’s way – in their five league meetings since the 2009/10 season, Dover have ended victorious on four occasions, with the only blemish being a 0-0 draw at Twerton Park in 2010.

Bath’s recent form confirms the assumption that City will provide a stern test. Lee Howells’ men enter the game on the back of three consecutive wins, over Bishops Stortford (2-1), Hayes & Yeading (2-0) and Whitehawk (2-0). This momentum has seen them climb the table and the Somerset side currently sit in fourth place in this season’s Skrill South table, just two points behind Ebbsfleet United.

Just as Bath City should provide a tougher test for Dover, Chris Kinnear’s side should offer a stronger challenge than their previous three opponents. Jeff Goulding has added goals to the Dover side since his arrival, and will be looking to score in a fifth consecutive match. Ricky Modeste has also returned the side after injury, and will be hopeful of another start as he attempts to rediscover the form which blighted opponents’ defences earlier on in the season.

Moses Ademola has also been used from the bench since his return from a loan spell at Canvey Island, and manager Chris Kinnear is said to be pleased with his impact thus far.

The goal threat from Bath this season has largely come in the shape of duo Ross Stearn and David Pratt, who have found the net 11 and 10 times between them. Whites should also be watchful of midfielder Noah Keats, who has scored three times in City’s last three matches.

Bath’s away form is amongst the best in the league, with the side picking up 19 points from 13 matches thus far. The home form which has dogged Dover in recent years has continued – although the current three-match home run the side are in the middle of is a perfect chance to remedy this – and Whites have taken just 14 points from 12 matches at Crabble this season.

With Sutton United facing Weston-super-Mare on Saturday – two of the three sides currently dividing Dover and Bath – the match takes on extra meaning, with all three points vital for both sides if they want to stay in the chasing pack.

Despite the recent inclement weather – further downpours are forecast in the lead-up to the match – there is not believed to be any doubt over the ability to play the fixture, largely down to the club’s investment in a blotter to remove any surface water from the Crabble turf.

After it had been used for the first time ahead of Tuesday’s match, Chris Kinnear said: “I thought that there would be no way the game would be on but the pitch was great. Everyone helped clear the surface water and though it was a bit heavy, it was nice and firm and well worth getting the game on.”