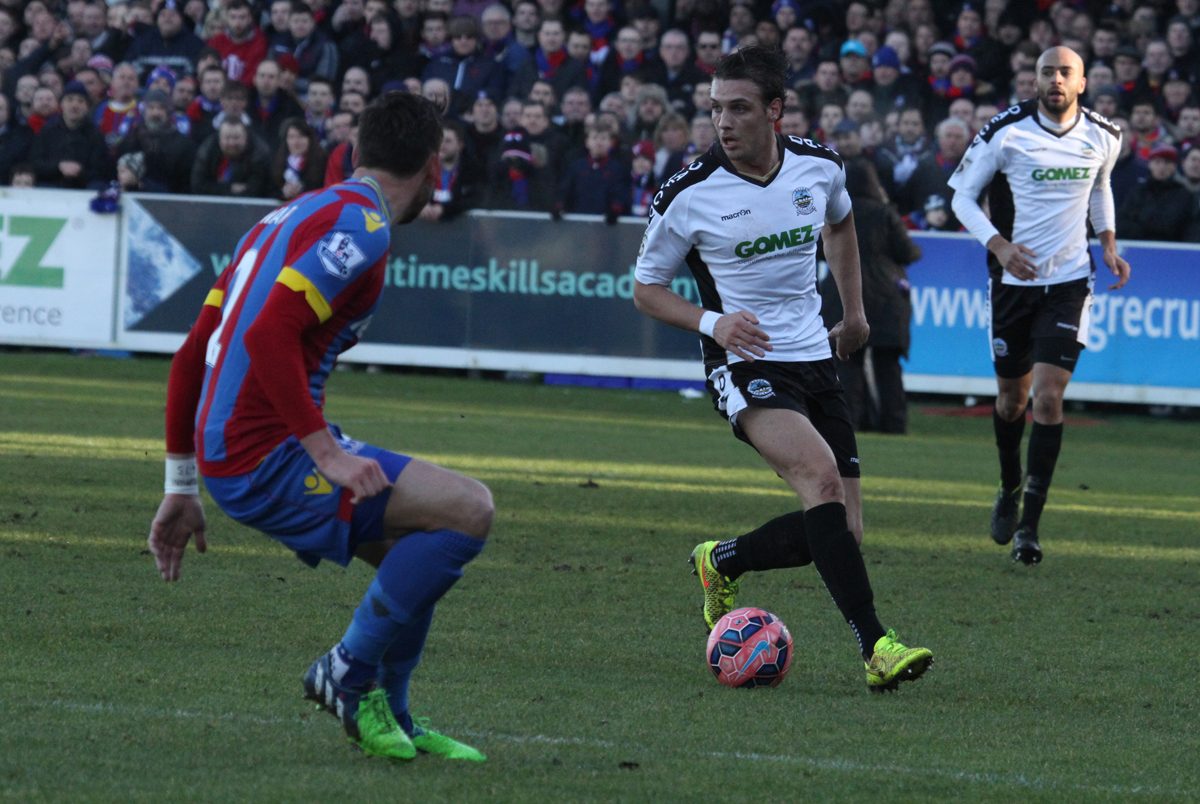 *BS*Midfielder Liam Bellamy speaks exclusively to Jack O’Sullivan, with a number of key messages for fans – noting he feels he is only just beginning to show what he can do, and is determined to keep hold of his place in the side.*BF*

Bellamy signed on at Crabble in June 2013, making the switch from Vanarama Conference South side Ebbsfleet United to become Chris Kinnear’s fourth signing of that summer. He penned a deal after a meeting with Kinnear, and said: “I had a couple of options and could have stayed in the Conference Premier, but I spoke to Chris and I really liked the ambition of the club.

“He wanted to go for promotion, and that matched my personal goals. I liked the sound of what he had planned, and I wanted to be part of a club who were winning games. I also spoke to Ricky Modeste and he helped sell the club to me. Being young, I just wanted to be playing football regularly and that is what Chris offered me – if I worked hard and earned it.”

A strong box-to-box midfielder, Bellamy ticked all the boxes and was part of the side’s promotion-winning squad, scoring six goals in 39 appearances. Despite being an undoubtedly successful season, there was one game in particular which Bellamy was gutted not to play a part in.

Rewind to Saturday December 7th, 2014. MK Dons away – a fantastic occasion for the club, making the trip to face a League One side in the Second Round of the FA Cup in a superb stadium. Bellamy had started the previous four matches, and even scored twice away at East Thurrock United in an FA Trophy match the weekend before.

It was, therefore, widely expected that he would keep his place in the side that took to the field at Milton Keynes as the club looked to cause a major upset.

Many Whites fans would have had trouble sleeping on the eve of such a momentous occasion, but 80 miles up the road in Wanstead, one cog in Kinnear’s team was equally sleepless.

I still have the message that Liam sent me at 8am on the morning of the match. It read: “Mate, I’m so upset. Been throwing up all night – there’s a bug, me and my little brother have been sick all night. My Dad had it earlier in the week. I’m actually in tears mate – I really wanted to play. I don’t want to let the side down.”

I had built up a good friendship with Liam and his father, Vince – who attends all of his son’s games – by this point, and I genuinely felt very sorry for him. He had worked incredibly hard to get into this team, but cruelly would miss out on the occasion. He tells me he had tried to convince himself that he was fine, and that he would be able to recover in time for the match, but in reality this was never going to happen.

He said: “I was gutted that I couldn’t even come along to watch the match and cheer the boys on. I ended up following it on social media and on the radio – that was hard, as I wanted to be there more than anything, but these things happen for a reason. It was tough to take but I had to get over it and not let it affect me too much. I had to concentrate on getting back into the side.”

His hard work and persistence paid off, however, and Bellamy soon worked his way back into the side. And he saved two of his better performances for when it really mattered – firstly, a commanding performance in the centre of midfield away at Sutton United in the second leg of the playoff semi-final, and one week later against his former club Ebbsfleet United in the 1-0 victory that saw Whites return to the Conference Premier.

This season, in a fiercely competitive midfield – recently bolstered by the permanent signing of previous loanee Solomon Taiwo from Luton Town – Bellamy has made 20 appearances and recorded more minutes on the pitch than fellow central midfielders Barry Cogan and Matt Lock.

He also netted his first goal of the season with a fine solo effort in the recent 6-1 demolition of rivals Dartford – so how close does the 23-year-old feel he is to his best? The answer – nowhere near, as he explains: “I think there is a lot more still to come. If I am playing regularly then you will get the best out of me. I feel I am growing and growing with each game, at the moment the team are doing really well and that is the main thing.

“I am happy with my recent performances and it is great to be a part of what we are achieving.”

Bellamy has been the target of criticism from a small minority of supporters at times this season, which he admits has affected him at times: “It’s never nice to hear, especially when I think some of the criticism has been a bit harsh and unfair, and I think at times in the past it might have affected me a bit.

“But it’s part and parcel of football these days, and of course fans are more than entitled to their opinions. They help to pay our wages and should be free to air their views. It’s just human nature that it plays on your mind a bit though – but I’m becoming mentally stronger and just focusing on being the best footballer I can be.

“I have received some very good comments over the past few weeks and I hope that can continue – if it’s deserved, of course! I just ask that the fans show faith in me, stay patient and I will do my best to be a key player in this team. I want success more than anything and I will always give 100% in a Dover shirt.”

This is a player with pedigree. Starting his career at Charlton Athletic – an incredibly tough youth setup to break into, Bellamy has also been on the books of Championship side Brentford and has aspirations of one day returning to League football. He has hopes that could even happen this season, with Dover: “I definitely want to be back in the Football League. It’s all I’ve ever wanted to be – I left school at 16 to become a footballer and I think I can play full-time again, for sure.

“I feel I have the ability to do it, but it’s going to take a lot of hard work. The aura you get around the club is that there’s a winning mentality and we genuinely believe we can achieve something very special. The foundations are there right across the club, from the Chairman to the manager to the players.

“I know it is going to be hard to keep my place in this side as there are a lot of good midfielders at this club. If I want to stay in this side then I need to keep playing well and putting in good performances. The competition is good, though – I thrive under that kind of pressure and wouldn’t want to be guaranteed a starting place every single game.”