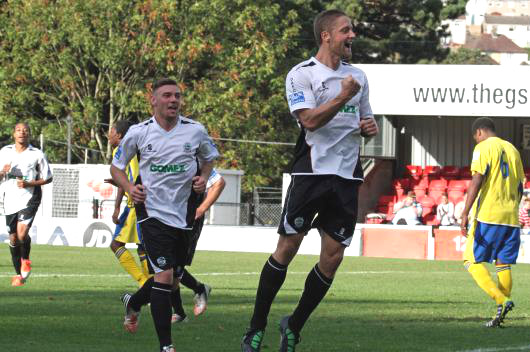 *BS*Whites’ top scorer Ben May says the players are itching for Sunday’s promotion play-off final game at Salisbury. He expects to be fit for the big match.*BF*

Ben came off with a minor injury against Eastleigh in the semi final 2nd leg but was immediately lifted when he won the Supporters Player of the Year award that evening.

Despite gaining instant adulation from all Dover fans, the former Millwall, Scunthorpe and Barnet man admitted it was a surprise when he was announced the winner at the awards ceremony:
“I had been thinking it would be nice to win but a lot of the lads have had really good seasons so I wasn’t expecting it.”

Of course, the end of presentation event could have been a sombre affair had Whites not made the final, coming through a nail biting penalty shoot-out to beat Eastleigh.

Forced off with a tight hamstring midway through the second half, the burly striker was always confident his team-mates could secure a spot in Sunday’s final without him: “It was frustrating I could not make a difference on Saturday, but I could not sprint and me coming off was for the good of the team.

“The right people stepped up and took the penalties and Mitch (Walker) has had a great season; he could have won player of the year.”

Ben added: “Perhaps we were subconsciously too defensive at Crabble, but we deserved to win over the two legs, especially for how we played at their place. Plus the fact we had beaten Eastleigh twice in the league as well.”
*Ppic1*
Ben, who also works as a personal trainer, has plundered over 20 goals this season, comfortably surpassing his previous record of 11 when at Millwall as a youngster. Explaining why his spell at Dover has been so fruitful, he said: “Being a personal trainer and looking after others has really helped me keep myself better. Plus training less has also made a difference as I suffered a lot of injuries when I was a pro.”

Despite his hamstring trouble on Saturday, Dover’s top scorer believes he will be fit to play in Sunday’s crunch game: “I could not train Tuesday, but the week’s rest should do me good.”

Sunday’s game will see Chris Kinnear’s men travel to Salisbury and should Whites be able to topple their opponents, they will make a first return to the National Conference since falling out of the division in 2002.

Whites fans will take huge heart from the fact their team has not lost away in 10 games since Kinnear’s return in January, one of which was a 1-1 draw at the Raymond McEnhill Stadium, where only a last minute Dan Fitchett goal prevented Dover from taking all three points.

When asked if Dover could pull off a sensational victory in what is a hugely significant game for everyone involved, Ben responded: “We will go for it and will not be messing about. All the players are itching to play and we are confident. I’m looking forward to it.”