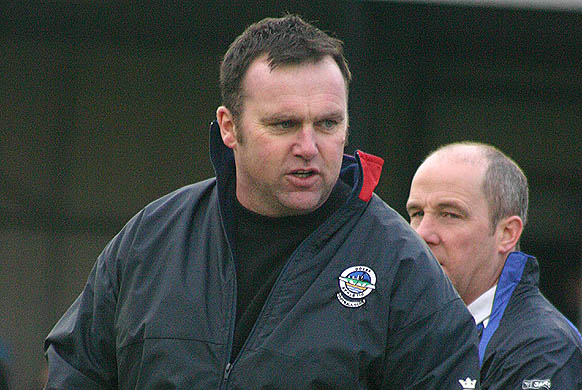 *BS*TERRY WHITE has warned his Dover players that some of them may be among the anticipated 2,000 fans at Crabble.

*BF*The Whites caretaker-boss admitted his blood is still boiling after his team were hammered 4-1 at Tooting and Mitcham.

True, the hosts did not deserve to win the game by such a margin – but the manner of Dover’s performance got his alarm bells ringing.

He said: “Frankly, it was not good enough. After 10 minutes, I was happy with the way things were going and was telling Steve Nolan that if we get the first goal we could end up winning comfortably.

“But then after 30 minutes, we were 3-0 down. The way we collapsed was alarming. Some of the players were not pulling their weight and I’ve been in the game long enough to know when someone is pretending to put in a shift, when in fact they are not.

“I won’t put up with that and players will learn that when they’re not in the team. I’m not afraid to make changes – and I’ll be making changes for the Maidstone game.

“We train tonight (Thursday) and I will make my mind up on the team line-up afterwards.

“I want to see a reaction to that defeat on Tuesday. As well as Tooting played, we should not have been beaten by that scoreline. The overall performance was poor.”

Big Tel took some stick for cautious tactics that reaped a goalless stalemate at Leatherhead a week earlier. In hindsight, he wish he had applied the same tactics for the Tooting game.

He said: “We took a lot of stick for not being attack-minded enough at Leatherhead – but sometimes you have to play that way in games. We didn’t go to Leatherhead looking for a point. We went there with the intention of keeping it tight and trying to nick a win – or at the very least get a point.

“At Tooting we tried to be a bit more expansive and look what happened. But that’s not an excuse for the performance, which simply was not up to the standard expected by Dover Athletic.”

*Q1*Managers up and down the country all have one thing in common. They are the best thing since sliced bread after a win – and questioned after a defeat. Terry is no different.

But one comment did make him chuckle this week.

He said: “I don’t go on these Internet forums because I’ve never been very good with computers. But one of my mates is well into it and he was looking at some comments from fans.

“There was a call for me to bring back Danny Chapman and John Keister into the team. Only a couple of weeks ago, I was saluted for apparently dropping them!

“I do want us to play entertaining football and to attack. It’s probably too late in the season to completely overhaul the way we play because a style has already been instilled into the players.

“What we could do is mix it up a bit and be more creative. We certainly need to pass the ball a lot better – otherwise we’ll struggle to open teams up in the final third. That is something we can improve now.”

Big Tel has also told his players they are playing for their futures at the club too and if he is still in charge of first-team affairs, juicy contracts will not be handed out to under-performing players.

He said: “Sadly, there are a few players who are not hungry and seem content with their contracts. That’s not a dig at experienced players here – I am talking about players of all age groups.

“If I am in charge in the summer, we won’t be handing out super-duper deals to these kind of players. I want hungry players here who want to play at the level we’re at and a division higher.”

The experienced Welsh frontman – like other targets – opted not to join due to travelling.

Big Tel said: “It is a bit of an handicap when trying to attract players here.

“Lewes have offered us a couple of players but their manager doubts whether they will want to travel to Dover to play for us. But I can assure our fans that no-one is working harder than me to try to bring fresh players to the club.”

Terry is aware of the dangers Maidstone will present Dover and has had them watched a couple of times.

He said: “I’ve got a good idea how they are going to set their team up against us and we’re going to need to produce a good performance if we’re to beat them.”