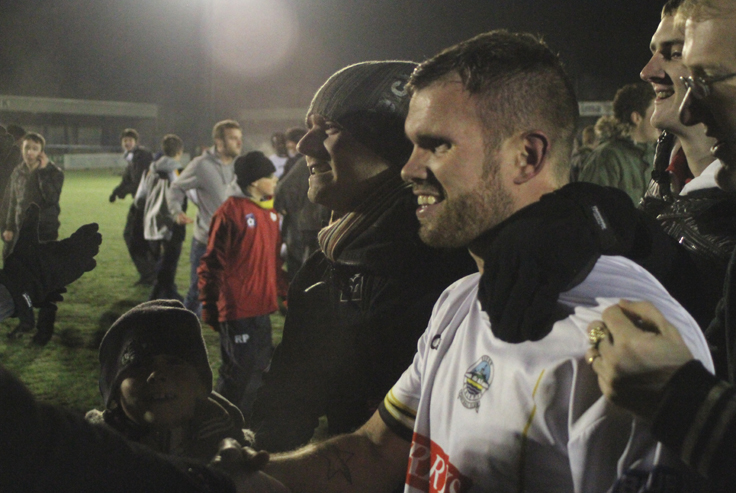 *BF*Birchall’s 29 goals this season, 11 in the FA Cup, have attracted the attention of a host of League clubs.

But Hayes – who nutured Millwall striker Steve Morison when he managed Bishop’s Stortford –
reckons there are not many pro clubs that can accomodate Birchall and only a Premier League or Championship outfit would be able to prise him away from the Kent coast.

He said: “Adam is in a very niche market – not many clubs can properly accomodate him in the lower leagues. He needs to be in a team that plays good football, passing through midfield, and not in a side that is direct.

“It didn’t work out for him at Barnet and Mansfield. He struggled to cope after being released by Arsenal.

“But he is enjoying his football again here and always has a smile on his face.

“He has great technique, a low centre of gravity, a great burst of pace, links up play well and literally passes the ball into the net. Very much in the ilk of Rooney.

“I sat down with him during the summer and told him not to be predictable. As a striker, you need to get yourself into the right positions to score and have an element of surprise about your game.

“Adam’s achievements this season are down purely to him but I’d like to think I had a bit of impact there too.”

Hayes added: “We would never get in Adam’s way if he wanted to further his career but it would need to be a good offer for him, and the right club. I can’t see Adam going to a League One or League Two side as he’s done that before.

“We’re not touting him about that’s for sure – and want him to stay with us and help us in our project to get this club back into the Blue Square Premier and possibly have a crack at getting into the Football League.”

Former Arsenal winger Hayes’ phone has been red hot with calls from his old Gunners team-mates.

He said: “Perry Groves, Michael Thomas, Lee Dixon and Ian Allinson have all been in touch, wishing me luck.

“This FA Cup run is the greatest achievement in my managerial career – and certainly a highlight of my entire time in football.

“Huddersfield should beat us – a comfortably. But one thing I’ve learned about the group of players at Dover is to expect the unexpected. We have some matchwinners.”

*BS*THIS article is the property of the author and doverathletic.com and cannot be reproduced under any circumstances.