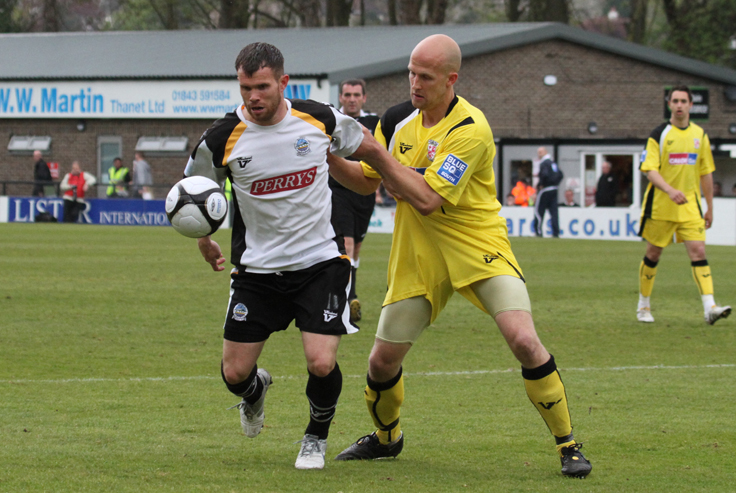 *BS*ADAM BIRCHALL has warned that Martin Hayes may be a laid-back geezer – but he is a manager who demands the best.

*BF*Former boss Andy Hessenthaler always drove a hard bargain with his players and only was satisfied with 100 per cent performances.

Hayes has a more relaxed attitude but that only masks a tougher interior.

And striker Birchall admitted: “He only demands the best – and will let everyone know if they are not hitting the standards he expects.

“I find him a far more laid-back character compared to Hess. Andy was very much in your face – almost boyish – but obviously a very good manager.

“Martin isn’t that type of guy – yet his standards are very high too and that’s what is important.”

Adam is encouraged that Hayes is looking to play with wingers and believes that the one weakness in the squad last season was a lack of width.

*Q1*The Whites striker said: “Once Jerhal Hughes left the club, we were struggling for width. He was great at coming on towards the end of matches and stretching the opposition.

“He was a great outlet for us and a player who got behind defenders. That’s something we need to improve and Martin, of course, was a winger so knows all about this part of the team.

“It’s great to hear he is looking to strengthen this area.”

Adam is confident Hayes can help the club deliver another promotion bid this season – and says the core of the squad is exceptionally strong.

He said: “The bulk of the squad is still here from last season and we just need a few more to improve us. I think Martin has an excellent chance of taking us forward – and the atmosphere is very positive. We can have a good season.”

The former Barnet ace says he was encouraged by the team’s performance during the 2-0 defeat to League One Colchester in the opening tune-up match.

And he added: “There was a good work ethic and I thought the trialists looked good. It was daunting going into the game as we only had one session with the ball.

“You always like to have a good feel for the ball before going into a game – but, despite that, I thought we did pretty well against a very strong Colchester side.”

*BS*MEDIA outlets are reminded that articles on doverathletic.com are copyrighted. Permission must be sought before reproducing any material.