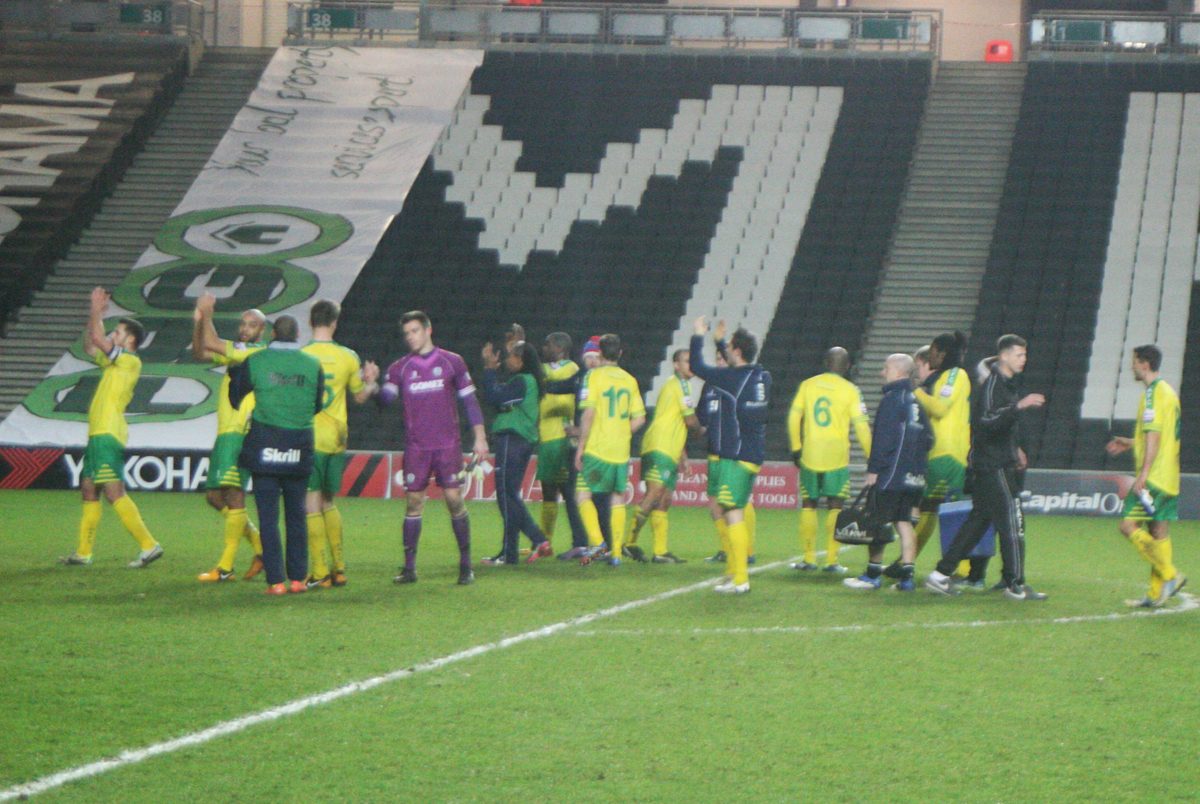 *BS*Dover Athletic return to league action on Tuesday night, facing league leaders Bromley at Crabble. Whites will be keen to follow up on their fantastic performance in the FA Cup with all three points in this big Kent derby.*BF*

Saturday was a memorable day for all involved with the club, but one that left players and fans with a feeling of ‘what might have been’.

Creating a number of chances throughout the match, a draw would probably have been a fair result against League One side MK Dons but a solitary strike from Ben Reeves early in the second half sent Whites out of the FA Cup at the second round stage.

A trip to holders Wigan Athletic in the third round would have been the reward for progression on Saturday, which would have offered another fantastic away day for the passionate and vociferous fans that made the trip to Milton Keynes.

Over 1,000 travelled to Stadium MK on Saturday – the biggest away following of any club competing in the FA Cup at the weekend – and this fantastic support spurred the side onto arguably their best performance of the season.

Many positives can be taken from Saturday’s showing, and it is now important that this is translated into performances in the remaining competitions that Whites are involved in.

With an FA Trophy second round match at home to Leamington taking place on Saturday – as well as a quarter final tie in the Kent Senior Cup away at Dartford still to be rescheduled – there remains an overriding feeling within the Dover Athletic squad that this season can be a successful one.

The bread and butter of Skrill South action returns to Crabble on Saturday, with this being Whites’ first home match in the league for nearly two months – ten matches ago, the side drew 0-0 at home to Havant & Waterlooville. Six of the following nine matches were in cup competitions, leaving Whites with three games in hand over the majority of the side above them.

Wins for Havant and Staines at the weekend saw Dover slip to 14th place in the Skrill South, but a congested top-half sees the play-off places only five points away. A busy December period sees five league matches due to be played, three of which come against the current top three in the division – Eastleigh, Ebbsfleet and Tuesday’s match against Bromley.

Mark Goldberg’s side have got off to their usual good start to the season, but even by their standards this has been a great opening four months – four points clear at the top of the table, Bromley are top scorers in the division and have won 12 of their opening 16 matches.

At home, they are yet to drop a point – nine wins from nine games have yielded 31 goals – but away from home, they have at times struggled. Defeats on the road have been suffered against Bishop’s Stortford, Eastleigh and Sutton United, with just eight goals being scored in their seven away matches thus far. Three of these came against newly-promoted Concord Rangers back in September, highlighting a difference in their results at their Hayes Lane ground and away from it.

Whites hold the best defensive record in the league this season, conceding just nine goals in their 14 matches. Tuesday’s match will be a tough test for the side, and the defensive frugality shown thus far will need to be continued. Goalkeeper Mitch Walker earned a place in the FA Cup team of the day for his excellent performance on Saturday, and becomes the second player to receive such an accolade in the competition after Chris Kinnear Jr’s place against Corby in the first round.

The side’s last league outing was a comprehensive 4-0 win away at then-managerless Chelmsford City, but Tuesday night’s game is sure to provide one of the toughest tests the side have had to face so far this season.

Confidence should be taken from Dover’s head-to-head record against Bromley in recent times. In the last four seasons, since the side’s return to this level, Whites have won six times and drawn twice. Last season’s league meetings between the two saw two victories for Kinnear’s side – 1-0 at Crabble, courtesy of a wonder-goal from Lloyd Harrington, and 4-1 at Hayes Lane in the final game of the regular season. On that day, goals from Harry Ottaway, Moses Ademola, Daryl McMahon and Billy Bricknell swept Bromley aside.

Ademola excepted, the remaining goalscorers from that match have all now left the club. In addition, despite only seven full months passing, seven further players from the matchday squad have moved on as a summer of many new faces arriving at Crabble was soon to begin.

Bromley boast the division’s top scorer in their ranks. Bradley Goldberg, son of boss Mark, is on-loan from League Two side Dagenham & Redbridge and has found the net ten times in the current campaign. Strike partner Pierre Joseph-Dubois, voted the club’s Player of the Year last season, has seven goals to his name.

Also dangerous for Bromley is Ryan Hall. The midfielder re-joined the club last Friday having previously spent two years at Hayes Lane between 2008 and 2010. Hall made 84 appearances for Southend United, scoring 19 goals, before moving to Leeds United and subsequently being loaned out to Sheffield United.

On his return to his parent club, Leeds United announced that Hall had been suspended pending an investigation into a breach of discipline. Hall was subsequently released from his contract last month, and offered to play for free for Bromley as a way of thanks to Mark Goldberg for previously getting him back into the Football League. Hall’s second debut for the club came in last Saturday’s 3-0 home win against Farnborough.

Dover should have Liam Bellamy available for selection after illness ruled him out of Saturday’s match against MK Dons, and the midfielder will be hoping to win back the starting position he had been impressing in.

A straight choice between Bellamy and Ricky Modeste is likely to be Chris Kinnear’s most pressing selection decision. Modeste, who only started Saturday’s game because of Bellamy’s unavailability, managed an hour against MK Dons but is still not fully fit after his recent injury. If both Modeste and Bellamy are unavailable, either Michael Bakare or on-loan Brian Woodall are likely to get a chance to impress.