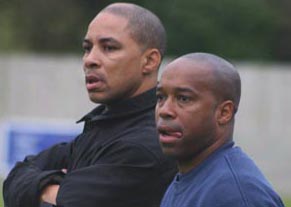 That was how the Whites boss felt after dominating an away match for the second week running but ending up losing by a single goal.

Eastleigh moved into fourth after pick-pocketing three points from their Kent visitors, meaning that Browne’s new-look Dover side have lost all four of their away
games against the top four teams in the division.

The Eastleigh officials, like those at Hampton the previous week, apologised for winning a match against a Whites side who controlled long periods of the game.

But Browne said: “I’m fed up with playing well and losing. It’s beginning to get boring. We need wins and playing well is of no consolation. I could accept losing, if we played poorly, but to dominate a match in the manner we did, and lose, is hard to take.

“The team put in another good performance. We played very well but our finishing let us down. I really do believe, like I said last week, that one team is going to be on the end of hammering.

“That’s the top four teams we’ve lost to away now. And with the exception of the 2-0 defeat in the FA Trophy, where we didn’t turn up on the day, we deserved something from all those games.”

Whites have played a staggering EIGHT out of their last nine games on the road – four out of five under the Browne regime. But now the club can look forward to playing three home games on the spin, starting against Harrow tomorrow night (Tuesday, kick-off 7.45pm).

Home advantage, and a big crowd, could really give Dover an even bigger chance of grabbing three crucial points – like they did against Tonbridge in the last home game nearly a month ago.

Browne added: “The fans can play a big part for us and I hope we get a decent crowd. All the Champions League stuff is on television but I’d hope the public can come out to see us. We really are improving and have only lost by the odd goal against three of the top four teams away from home.

“I expect home advantage to help us even further and we really need to start collecting some points and these three games coming up give us a great chance of doing that.”

The Whites boss signed prolific striker Paul Armstrong, who was last week on trial at Bristol Rovers and also trained with Millwall earlier this season.

Browne said: “Paul’s scored goals everywhere he’s been and is a talent. He is a proven goalscorer and that was something we needed. There weren’t too many chances for him on Saturday but he will score goals.

“I’ve told him to come down and play for us for a month and we’ll see how things shape up from there.”

The Dover boss says players coming in has now come to an end for the time being and will now be looking to shift a number of players out – many of them on loan. Roni Joe has been released this week.

He said: “We’ve got to stick to a budget and I understand that. I am working on getting some lads out this week. A number of the boys who play in the reserves, but who are on contract, need to play at a higher level, so some loan deals will do them good. We can also save on their wages for a while.

“I am happy with the squad I’ve got and it is important now that everyone keeps the faith and continue believing that we will start winning matches. Once you stop believing, you’re in trouble.

“We’ve not stopped believing in ourselves. We’re outplaying the league’s top teams away from home. The results are surely going to start going for us.”