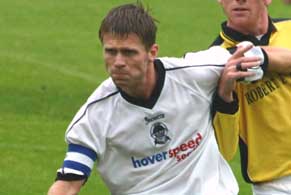 DOVER ATHLETIC can confirm that both winger Matt Carruthers (pictured) and striker Chris Wright will be retained by the club – after clear-the-air talks with new boss Clive Walker and chairman Jim Parmenter.

Both players have been subject to internal disciplinary procedures after breaking the terms set out in their contracts. But the club have decided to give both local players a second chance following frank discussions held tonight at training.

Jim said: “We have given both players a warning. They both have a part in the future of Dover Athletic but have been told in no uncertain terms what is required of them, if they are to remain a part of the club’s plans.”