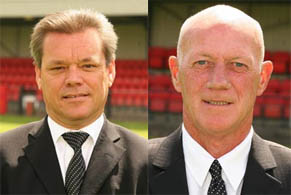 JIM PARMENTER has dismissed talk of boss Clive Walker resigning or being sacked as crazy, stating that he is the man for the job and won’t be going anywhere.

Following Whites loss at Ashford on Monday, the Dover chairman revealed that he and his board of directors would be meeting Clive the following day to discuss the current situation.

This led to speculation amongst supporters that Walker’s job could be in doubt. However, Parmenter is backing the Dover boss to improve performances, starting at Dulwich’s Champion Hill stadium this Saturday.

Jim said: “Clive is going nowhere and it’s crazy to suggest otherwise, as we are 6th in the table with games in hand over the teams above us.

“Everyone is aware the performance at Ashford was not good enough. Application and commitment need to improve in some areas and Clive will be taking steps to sort that out.

“Now is the time for cool heads and sensible thinking. We have plenty of ability in the squad so bringing in more new players isn’t the answer. Successful clubs need continuity not knee-jerk reactions.”

Jim was happy with the outcome of the meeting between the board of director’s and Clive on Tuesday.

He said: “We talked about the Ashford game and the current situation at the club in general. We had a sensible discussion about what adjustments need to be made to get us back on track.

“Clive has identified the issues that need resolving and is determined to put them right in the coming weeks. This will become evident very soon.”

January looks set to be an important month for Whites, with the next four games all against top-half teams. Games against Horsham and Leatherhead will be crucial and wins would put Dover in a strong position.

Still one game away from being halfway through the season and with 69 points still to play for, Whites’ fortunes remain firmly in their own hands. Craig Cloke and Daniel Braithwaite should return this month, which will be a welcome boost to the squad.

Something Dover can always count on is excellent support, as they displayed at Ashford in numbers. Jim Parmenter urges them not to panic and to keep the faith.

Jim said: “The first half performance at Ashford was very disappointing and let down our supporters badly but we need to keep things in perspective. If we win our games in hand, only Tonbridge will have more points than us.

“Keep supporting the team and get behind the manager, and let’s move onwards and upwards.”