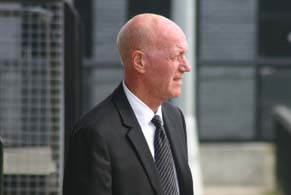 CLIVE WALKER has challenged his young players to stand up and be counted as Whites enter a tough series of games in Ryman One.

The Dover boss – never allowing injuries to be an excuse for defeat – admits his team did not defend well at Stonebridge Road against Dartford.

He was particularly disappointed with both Darts’ goals in the first half, although recognises that Steve Hafner’s winner after the break was a stunning strike.

Clive said: “We could’ve won the game had we done some basic defending right. Their two first-half goals were poor from our point of view. The third was a good strike, I’ll give their lad that, but he could’ve perhaps been closed down quickly.

“But we’ve got to get this defeat out of our heads and look to beat Met Police away on Saturday, which won’t be easy. However, I feel we can improve on the performance against Dartford and it’s down to these young lads to stand up and be counted.

“We’ve lost some important players during these two games. Danny Chapman, Craig Cloke, Daniel Braithwaite and Shane Hamshare are all good lads, who work hard for the team.

“Now it’s down to the kids to step up to the first team and show us what they’re made of. They’ve all got first-team experience, but the only problem is the amount of games they’ve played. You need experience in any successful side – and there’s going to be a lot of that missing now.

“However, what are the fringe players here for? They’re here to step up if we have injury problems like we do now. It’s their chance to break into the side and add competition for places.”

A lot of comment has been made, much of it not from Dover Athletic Football Club, about Dartford’s tactics during the two games. It is no coincidence that FOUR players were badly injured in the two games.

Clive does not want to get drawn into the argument – but admitted: “I thought the refs should’ve booked a few more players because there were some big tackles going in.

“Being big and strong is what football is all about and getting injuries like now happens all the time – and we’ve just got to deal with it.

“Steve Hafner’s tackle on Shane was a bit over the top in my opinion and he was very lucky not to get sent off. But that’s not my problem – my job is to get Dover Athletic out of Ryman One so we can get this big club back up the leagues again. We’re going to have to work our socks off to do that.”

Darts boss Tony Burnham’s matchday programme notes for Tuesday’s match suggested that Dover officials should apologise for comments after Saturday’s match and that there was nothing wrong with his side’s tactics.

Chairman Jim Parmenter insisted that referee Lee Venamore should have stamped down on dangerous tackles from the off during that game. Instead he opted not to, allowing some irresponsible challenges to be put in.

He said: “Well, their manager would say that, wouldn’t he? The tackle on Daniel Braithwaite was horrific and, again, the tackle last night on Shane was shocking.

“I used to know Steve Hafner at Margate. He’s a nice lad – and it’s disappointing to see someone like him putting in tackles like that.

“Clive has told us he doesn’t want to bring anyone in at the moment. He’s going to stick with his squad – but we are willing to assist him if he wishes to bring a couple in to plug the gaping holes in our squad.

“It is no coincidence that during two games, we’ve ended up with all our key players getting crocked. It’s a shame that football has become like this.

“If that was the way Dartford wanted to play, I said during the match ‘let them have the game’. I don’t want to be associated with football being played like that.”

Much has been made of the Dover officials’ decision to leave the ground straight after the match – rather than mixing with their Dartford counterparts.

Jim today issued a statement to the local media, after a one-sided press report that did not explain fully the situation.

He said: “The Dover directors left the ground after the match because our party (including two ladies) was subjected to a stream of foul-mouthed abuse from an individual, who appeared to be a Dartford official, and the decision was made to leave to avoid further confrontation.”