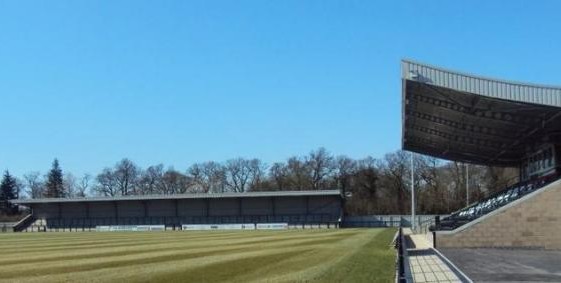 *BS*Whites will travel to Corby on Saturday with hundreds of supporters to back the team in the FA Cup First Round. Here is our fans guide for the game:*BF*

Chris Kinnear’s team will receive plenty of support this weekend for only the third FA Cup First Round tie in the club’s history.

DAFC Supporters Club are taking over 100 fans to the game in two coaches, while more fans will be travelling by car and train.

If you are planning to go to the game, check out our *Link1* for directions and stadium information.

Known as The Steelmen, Corby play their home games at Steel Park, which was opened in 2011 and is located adjacent to their previous ground, Rockingham Triangle Sports Stadium.

Steel Park has a capacity of 3893, of which just over 2000 is covered. The stadium has one seater stand for 577 spectators and a large covered terrace behind one goal. The other two sides of the ground are uncovered shallow standing areas.

Corby’s club bar will be open from 12.30 and will be serving hot food to all supporters.

Follow live updates throughout the day on Twitter via *Link2* and *Link3*, which will have the usual team news and regular match updates.

We welcome you to join in. Send in your photos and support on Twitter. We will share a selection.

Regarding concerns over the pitch at Steel Park following two postponements earlier this week after heavy rainfall, Corby Town staff and supporters have been working hard to prepare the pitch and are confident of ensuring a good playing surface for Saturday’s cup tie.

All being well, see you at Steel Park for the FA Cup First Round tie!