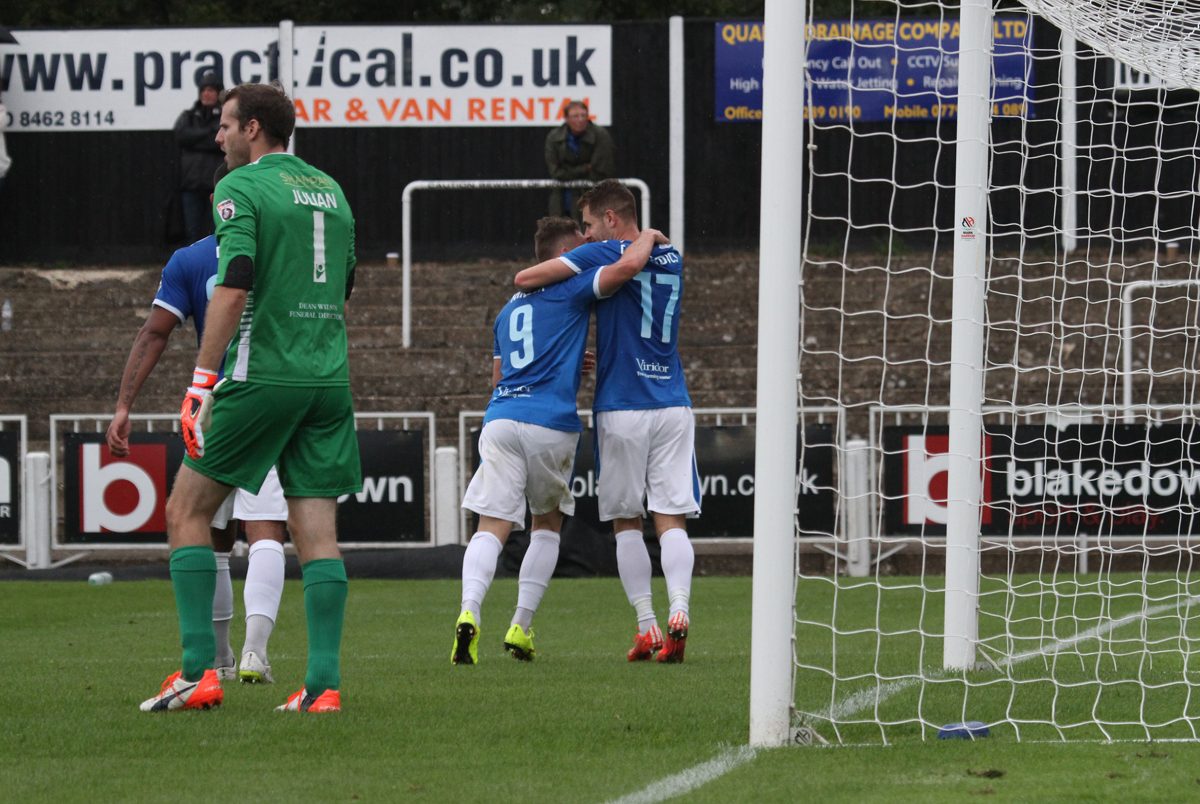 *BS*The first month of the 2015/16 season has seen Dover Athletic feature in 7 competitive matches including 3 wins and 3 draws, which sees the Whites in 7th place in the Vanarama National League.*BF*

*BS*Barrow AFC*BF* (A) – 1-2 Loss
The team and travelling fans made the 762 mile round trip on the first day of the season, but a mostly dominant display from the Whites and Nicky Deverdics’ spectacular long-range effort wasn’t enough to win the day as the home side came out victorious.

*BS*Kidderminster Harriers*BF* (H) – 3-2 Win
Dover had no time to dwell on the disappointment of the result at Barrow, and hosted Kidderminster Harriers the following Tuesday evening (11th August). Captain Jamie Grimes was up against his former team-mates only shorty after leaving the Harriers in May. A blow came for the Whites early on in the game when talismanic winger Tom Murphy went down injured after 20 minutes.

However, the home side rallied and finished the half strongly with two late goals. The first breakthrough was from Grimes, who towered above the opposition defence to head home from a corner. The second goal came from new striker Ricky Miller, who slotted the ball into the goal from an acute angle, following substitute Modeste’s cross.

The fans in attendance were treated to a highly entertaining second half, with the Whites hitting the woodwork, and the Harriers clawing their way back to 2-2 at the 70th minute mark. Dover demonstrated their ‘never say die’ attitude that night and managed to regain the lead in the 83rd minute thanks to striker Stefan Payne and went on to record their first win of the season.

*BS*Chester FC*BF* (H) – 0-0 Draw
With the first win under their belts, the Whites were in confident mood, despite losing two wingers (Murphy & Modeste) in the space of 2 days. The following Saturday (15th August) saw another home tie against Chester FC, who had achieved a respectable 1-1 draw against Cheltenham Town in their previous fixture.

The final score line in itself was misleading, as the match was very eventful. Newly signed 6ft 4in centre forward, Duane Ofori-Acheampong, made his full Dover Athletic debut in a shuffled Dover side, after injuries to Murphy and Modeste. The Visitors hit the woodwork on two occasions and Dover missed numerous chances to bag all three points in both halves, and were seemingly denied a penalty for hand ball. At the end, a draw seemed a fair result and heads turned towards a Tuesday night trip to Aldershot.

*BS*Aldershot Town FC*BF* (A) – 1-1 Draw
The boys in White were once again on the road from Crabble, this time making the relatively short trip to Hampshire side Aldershot Town. With a beautiful sunset behind the EBB Stadium, Dover started the quicker side, as has been a frequent occurrence this season.

Aldershot at times looked overwhelmed with the quick movement of strikers Payne, Miller and Ofori-Acheampong. The team were quickly rewarded for their play, when the deadlock was broken in the seventh minute by a wonderfully placed top corner shot from hot prospect and last season’s club top scorer, Stefan Payne. Payne used his skill and quick feet to turn towards goal on the edge of the area and fire the ball out of the reach of the diving Shots goalkeeper, showing his capabilities to the near 2000 people crowd. After a dominant 30 minute display, the Whites still only had one goal to show for, despite having several great opportunities to double and even treble their lead. However, it was Aldershot who got the next goal in the 37th minute, undoing all Dover’s hard work.

The momentum found itself with the home side, who came close to taking the lead in the second half. Jack Parkinson came on for Dover into the midfield to make his debut, helping the Whites to make a late charge for all three points. The sides had to settle for a point apiece, with both having reasons to rue their missed chances.

*BS*Altrincham FC*BF* (H) – 2-1 Win
Dover were unbeaten in three matches leading up to the home game versus Altrincham. Manager Chris Kinnear made Crabble a fortress during the last campaign and wanted to ensure that Dover’s excellent home form continued. As had been the case throughout the beginning of this National League season, Dover began the game quickly and wanting to do as much damage to Altrincham as possible before fatigue became a factor in the 26°C+ conditions at Crabble. Ofori-Acheampong looked to be in fine form, showing not only his aerial qualities but also his willingness to chase and close down the opposition defenders, something that the Dover fans were quick to warm to.

To the delight of the home fans, Ofori-Acheampong was in the right place at the right time to receive a cross from Stefan Payne as he opened the scoring for Dover off the underside of the crossbar. This was just rewards for the home side, having created many chances from the first minute. However, the sides were to go into the tunnel at half time all square after Altrincham equalised in the 41st minute. In the second half, Altrincham goalkeeper, Coburn, made a string of quality saves to deny Miller, Payne and full back Magri.

The Robins eventually succumbed to the pressure that Dover were putting them under, and the winner came in the shape of central defender Sean Raggett, who managed to smash home a loose ball, following a Dover attack. The final result replicated the same home fixture from last season and moved the Whites up three places to 10th.

*BS*Bromley FC*BF* (A) – 1-1 Draw
The Whites made the journey to face newly promoted Bromley FC, who gained automatic promotion as Champions of the Conference South to the Vanarama National League last season.

Dover, in their blue away kit, made a good start to the game and came close to taking the lead in the first half through Nicky Deverdics’ shot hitting the crossbar. The home team also looked lively, drilling an effort across goal, going just wide. Stefan Payne in the second half looked very dangerous, forcing the Bromley goalkeeper to beat out his powerful shot, following some neat play from the Whites.

Payne then came close in the 58th minute to breaking the deadlock with an audacious back-heel towards goal, which hit the Bromley post and went out of play.

It took a clever turn and change of pace from Ricky Miller to pull away from his marker and find Deverdics on the edge of the area, who subsequently curled a fine effort into the top corner of the goal, out of reach of the Bromley goalkeeper. It looked like all three points were on their way back to Crabble, however with a late period of pressure from the home side, Bromley earned themselves a penalty in the dying minutes of the game. Although Dover goalkeeper Mitch Walker valiantly saved the initial penalty kick, Bromley managed to reach the rebound and score to leave things level at the final whistle.

*BS*Boreham Wood*BF* (H) 2-1 Win
The final fixture in August took place on the final day of the month on the Bank Holiday Monday. Despite downpours of rain earlier on in the day, Dover hosted a side which had humbled Ex-Football League side Tranmere Rovers 2-0 earlier on in the season and achieved a credible 1-1 draw with promotion chasing Woking FC.

As has been a regular occurrence in the Whites’ August fixtures, the Dover boys started strongest and dominated the early period with attractive and invasive football. Dover looked to be opening the scoring early on with Stefan Payne being denied one-on-one by ex-Dover goalkeeper Preston Edwards in the 3rd minute.

It would be the away side who would take the lead unexpectedly in the 7th minute of the match, with a powerful long-range free kick, which Mitch Walker did well to beat out considering the wet conditions. From this, the Boreham Wood striker was first to pounce on the stray ball and make it 1-0, seemingly against the run of play. Despite this early setback, the team didn’t let this dampen their spirits and fought on to try and get back into the game.

Dover weren’t behind for long and in the 14th minute, thanks to a Nicky Deverdics cross from a short corner, Jack Parkinson headed home at the back post to level things up. This was Parkinson’s first goal in his first start for the Whites, in a reshuffled side playing a 5-3-2 formation. The impetus remained with the Whites and quickly Dover scored again to take the lead for the first time in the match. A Nicky Deverdics free kick from far out was struck powerfully and looked to be heading for the back of the net. Captain Jamie Grimes got the lightest of flicks to guide the ball into the goal at the back post. The Whites continued to play well and ended the first half strongly.

Boreham Wood in the second half looked a changed side, looking to catch Dover on the counter attack. Both sides came close to scoring; Miller and Payne for the Whites and a shot from Boreham Wood which bounced down off the crossbar and was deemed not to have crossed the goal line by the officials. The Whites hung on and managed to see off attacks from the away side, meaning that the side moved up 5 positions to 7th place and within 4 points of the Play Off positions. The win extends the team’s unbeaten run to 6, and manager Chris Kinnear can be proud of his teams’ achievements during the first month of the 2015/16 Vanarama National League season.