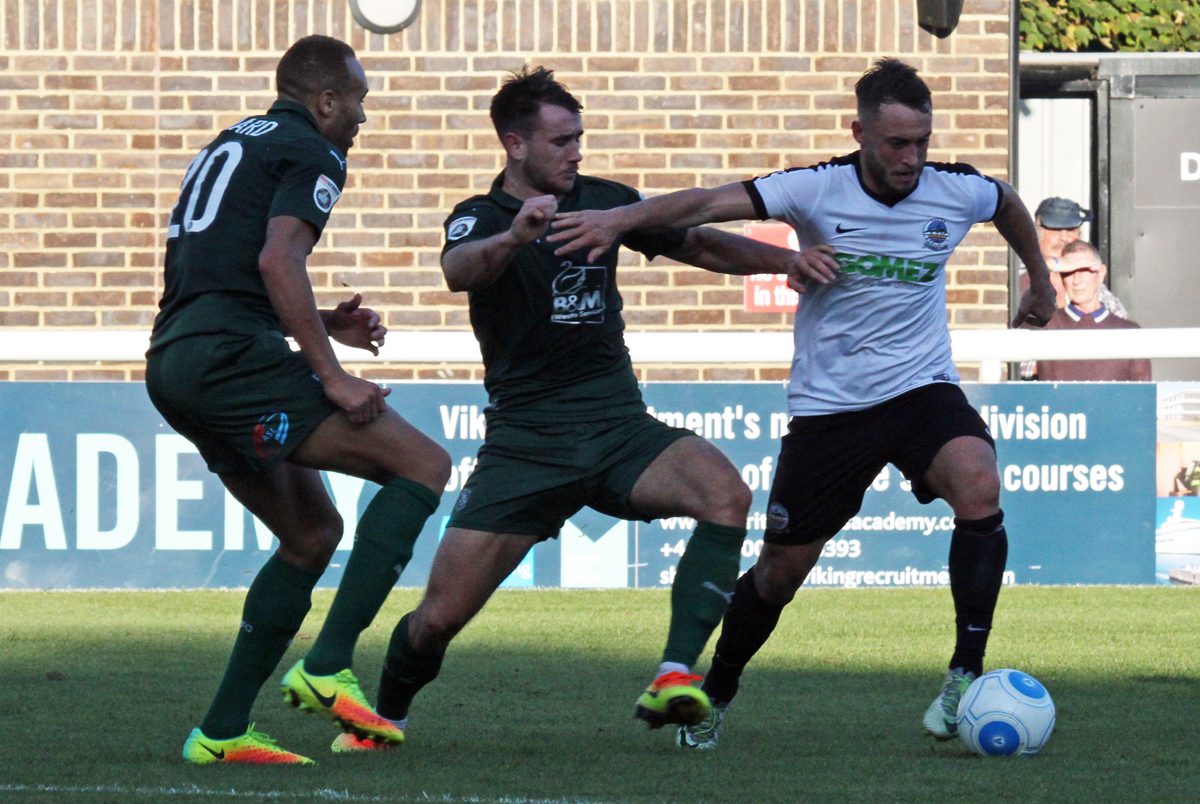 OCTOBER??S seven fixtures were full of goals as Dover scored 17, including the 6-1 rout of Braintree Town.

Whites won four and lost three in a rollercoaster month which left the club only three points off the play-off positions.

October didn??t start brilliantly for Dover, despite having beaten Forest Green Rovers, Lincoln and York City in the weeks before this game.

Dover had started this match particularly well and felt aggrieved not to have been in front at half time; only good goalkeeping and off target shooting kept the scores level at the break.

Chester came out of the traps second half and within seven minutes of the restart had gained a 2 goal advantage in the game, much to the surprise and dismay of the Whites.

Injury to goalkeeper Steve Arnold and with no replacement on the bench did not help matters and although Dover had their chances to get back into the match, three further goals from Chester in the final 10 minutes sunk the Dover ship in an afternoon to forget.

The result left Dover in ninth place and three points off the play-off positions.

*BS*Highlights start at minute 5:04 at the following link: https://www.youtube.com/watch?v=_K76KDaeE0U *BF*

Dover put Saturday’s drubbing at the hands of Chester behind them with a 3-1 over Sutton, though the visitors did give Whites a few frights along the way.

Mitch Walker replaced the injured Arnold in goal with Sammy Moore picking up a late injury in the warm up.

Ricky Miller put Dover ahead within three minutes, having been played through on goal by Moses Emmanuel, bagging his eighth goal in the League.

Both sides created chances to score but it would be Dover who would get the second goal of the game. Miller showed his pace and finishing to latch onto a long ball and fire past the Sutton goalkeeper from a very tight angle in the 58th minute.

Whites then suffered the blow of going down to 10 men, following an Emmanuel tackle and Sutton were then rewarded for their efforts and pulled a goal back in the 74th minute.

While many teams may have gone on to concede another, being a man down, Dover regained their two goal lead thanks to a long range volley from Jim Stevenson.

Walker would remind Dover fans of his quality after he saved a late Sutton penalty.

The win moved Dover up a place to eighth.

*BS*Highlights can be seen at the following link: https://www.youtube.com/watch?v=KSbd7775rHg *BF*

Dover made the journey to Tyneside to play a club they had beaten in all the previous four meetings.

Whites made the breakthrough in the 36th minute thanks to a goal from Jack Parkinson, however Gateshead would go into the half time break 2-1 to the good.

Gateshead scored again only three minutes after the restart and although Ricky Miller was on hand to bring the scoreline to 3-2, two minutes later Gateshead regained the lead.

Dover??s second away defeat in a week left the side ninth, but still within touching distance of fifth place.

*BS*Highlights start at minute 5:16 at the following link: https://www.youtube.com/watch?v=mw6U8AxkZXs *BF*

The final qualifying round of the Emirates FA Cup was a welcome distraction from the National League and provided a chance for Dover to get back on track with a good result.

Within 30 minutes Dover were 2-0 up from Miller and Mitch Pinnock goals and were somewhat cruising.

The home side suffered a double blow in the first half with an injury and then an injury to the newly substituted player, but this didn??t take anything away from the Whites?? excellent performance.

Ricky Modeste made it 3-0 on the stroke of half time as Dover finished the half in rampant fashion.

Tyrone Marsh was a half time substitute and added a fourth after 51 minutes, before Miller took advantage of a defensive mix-up to pass the ball into the net in the 58th minute to complete the victory for Dover.

A solid win for Dover, albeit against lower league opposition meant that the Whites would face Cambridge United away in the 1st Round Proper on the 5th November.

Following the 5-0 FA Cup win last time out, Dover were full of confidence going into the tie with Braintree, despite the fact that the Whites had only beaten the Iron once in the past four meetings.

Despite a good start from Dover, it was Braintree who struck first blood, with an exquisite curling finish to beat Walker after 12 minutes.

Braintree held onto their lead for just over five minutes as Aswad Thomas?? shot bounced off two Braintree players before somehow finding its way into the net for the equaliser – that was his first goal for almost a year.

Cue Dover??s top scorer Miller to turn on the style to stun Braintree into being 4-1 down after 33 minutes ?? it took all of 11 minutes for Miller to get his hat-trick.

For his first goal, Miller received the ball from Stevenson side on to two Braintree defenders. Ricky turned with pace and purpose and managed to find space to be able to nestle the ball into the side of the goal.

Four minutes later, Miller found himself on the scoresheet again; this time making a driving run to smash home into the top corner of the Braintree goal ?? not many goalkeepers would be able to keep that one out!

Miller completed his second hat-trick of the season when he beat two Braintree players and buried his effort past the helpless Braintree goalkeeper. That brought Miller??s tally to 15 league goals this season so far!

After an initial setback, Dover were in control and threatening to run riot. With 40 minutes on the clock, they all but sealed the three points thanks to a goal from Jack Parkinson.

Moore expertly delivered his free kick into the Braintree area and when the ball wasn??t dealt with, Parkinson was on hand to smash home from five yards out for his second goal in two games.

It wouldn??t take long for Miller to get his fourth of the game. In the 48th minute, Dover were awarded a free kick in a dangerous position. From the set piece Ricky stepped up and smashed his shot low and hard and into the back of the net.

A fantastic drubbing of last season??s play-off semi-finalists made it a near perfect afternoon of football at Crabble.

Dover moved up a place to eighth, just two points from fifth place

*BS*Extended highlights can be seen at the following link: https://www.youtube.com/watch?v=Fp5qjgPocFQ *BF*

Dover won their first Kent derby of the season thanks to a two-minute double from Miller and Ross Lafayette.

Brimming with belief following the 6-1 demolishing of Braintree Town only three days prior, the Whites went to Hayes Lane looking for all three points.

Although the home side could have taken the lead in the early stage of the game, Dover were showing their class and ability; forcing a good save from Bromley goalkeeper Julian and also a number of corners.

After 26 minutes Miller received a through ball from fellow forward Lafayette and Miller did the rest, slotting the ball under the oncoming Bromley goalkeeper and into the net.

Not to let Miller have all the limelight, Lafayette would double Dover??s lead just three minutes later after taking advantage of a poor back-header and fired in from an acute angle.

Bromley had their chances but Dover defended excellently and saw out the clean sheet. In the end, Dover??s control of the game never wavered and the win saw the men in blue move up to sixth place in the table.

Dover fancied their chances against Tranmere Rovers, having scored 18 goals in their last five games.

Rovers were one of the favourites to be promoted this season and unbeaten under their new manager.

Dover started the brighter and deserved their lead in the 22nd minute. Aswad Thomas connected with a Magri cross from the right to head home his second goal in as many matches.

Ten minutes later Tranmere were back on level terms, after some poor defending allowed Tollitt to dance through the area before Cook prodded home.

However, it was not to be Dover??s most memorable second half. Defensive mistakes and also good play from Tranmere meant that by 80 minutes, Dover were 4-1 down.

The goals came from Cook, an unfortunate own-goal from Walker and Tollitt to make the result at the final whistle somewhat deceiving.

After some fine form and a series of good results, Dover succumbed to defeat this time.

The defeat means the Whites are seventh 7th, but only three points behind the play-off pack.

*BS*Highlights start at minute 5:03 at the following link: https://www.youtube.com/watch?v=rwLNBne9nGE *BF*