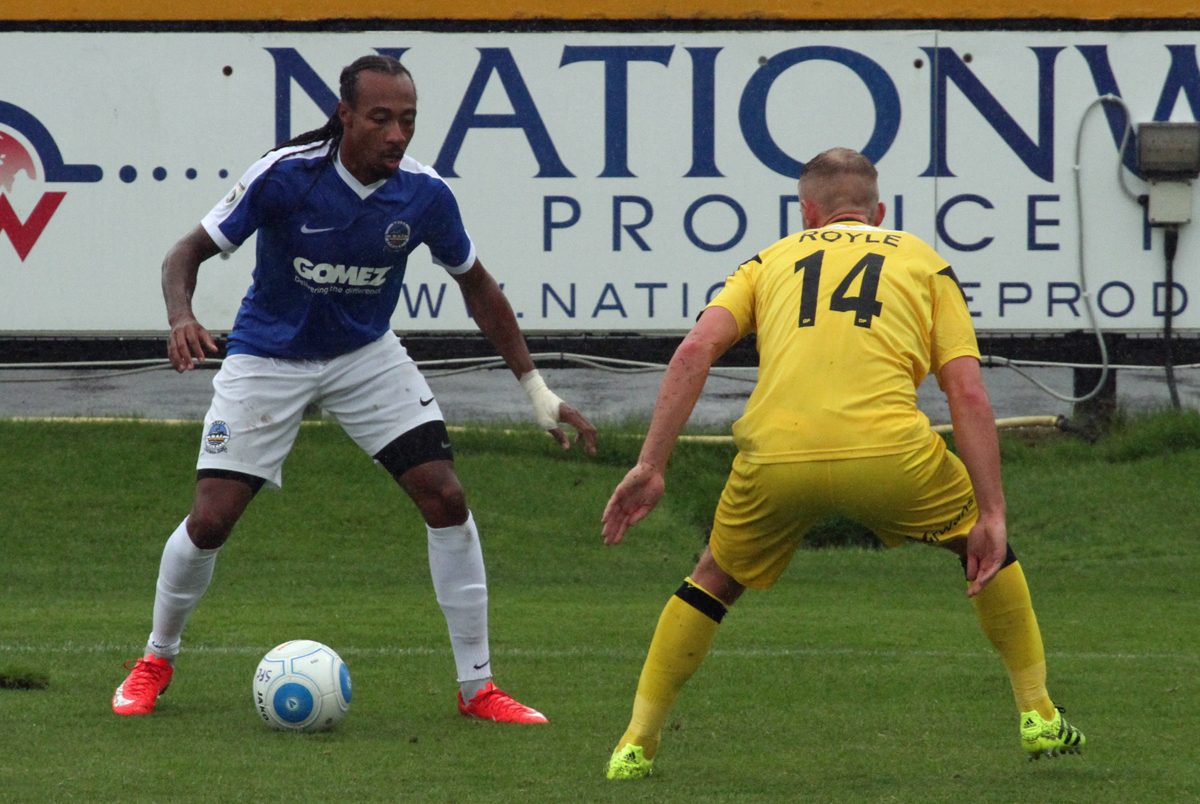 SEPTEMBER was a successful month for Dover; playing five fixtures and winning four of them, picking up 12 out of 15 points in the process.

Most memorably would be wins over two of this season’s early title contenders and taking all three points in Dover’s first ever clash against York City.

After the initial seven games, Dover were in 12th position with 10 points to their name and following two defeats in a row, managed to take all three points away to Southport.

Ricky Modeste scored a third minute goal with an early header to win the match on a cold and wet day on Merseyside. Dover had faced the Yellows on four previous occasions without victory and so the win was all the sweeter for the team.

With Whites moving up to 10th place in the table, the next fixture televised live on BT Sport would prove to be a test of how the team might perform this season, with a tough home game against top of the league Forest Green Rovers.

Matters didn’t start terribly well for the Whites, conceding an early goal in the seventh minute.

However, the team rallied and managed to claw a goal back only five minutes later through Ricky Miller.

Dover would go into the half time break all square and it didn’t take long for Whites to go ahead after Miller slotted home from the penalty spot two minutes following the restart.

However, Rovers soon pegged Dover back in the 49th minute in what was turning out to be a very entertaining game at Crabble.

It would take a sublime lob shot from summer signing Ross Lafayette to regain the narrow lead over the opposition, who Dover had faced in the play offs last season.

Yet again Rovers levelled late on in the game, making it 3-3 in the 85th minute of play.

Not to be denied though were a determined and focused Dover, no less Miller who would step up to complete his stunning hat-trick in the 87th minute to seal all three points for Dover in a seven-goal thriller.

The win ended Forest Green’s six-game winning streak and moved Whites up to eighth, just two points of the play off positions.

Whites faced a tricky tie against Dagenham & Redbridge just three days after an emphatic victory over one of the league’s title contenders.

However, the Tuesday night fixture against the Daggers would prove to be a difficult game with Whites conceding twice in the first half; ending Dover’s hopes of a third win on the spin.

Dover weren’t without their chances with Lafayette shooting wide from close range, and Aswad Thomas’ header being cleared of the Dagenham goal line.

Ever present defender Richard Orlu pulled up with a hamstring injury in the second half of the match and Ira Jackson Jnr came on to make his debut for the club.

Whites slipped to 10th following this defeat and now turned their attentions to another away fixture at a previous League Two side, York City.

The match between Dover Athletic and York City would be the first ever meeting between the two sides; one that the Whites would be looking to win.

Ricky Miller would prove to be the difference between the sides this time round, with his 20th minute strike and his seventh goal in the Vanarama National League so far this season.

Dover had missed a couple of glorious chances in the game, with Jack Parkinson missing from two yards out and Lafayette’s shot going inches wide in stoppage time in the second half.

Having faced off the challenge of a former League side in the form of York City, Dover would host a Lincoln City side that were only two points off the top and three points ahead of Whites.

One member of the Imps’ line-up that Dover fans were familiar with was Sean Raggett, making his return to Crabble following his move to Lincoln this summer.

Raggett appeared for Dover more than 70 times following Dover’s promotion back to the Vanarama National League, but would face his old teammates in this game.

Dover came out of the traps eager to show their intent early on and an early header from captain Jamie Grimes gave Whites the perfect start early on to settle any pre-match nerves.

Grimes’ powerful header from Sammy Moore’s corner-kick was the first he had scored in over a year.

Dover seemed to dominate the game, with Lincoln not registering a shot on target until half way through the second half.

Dover’s forwards were in scintillating form and the win was wrapped up by Moses Emmanuel in the 53rd minute, who exchanged passes with Lafayette before curling his shot into the corner of the Lincoln goal to make it 2-0.

This was Emmanuel’s third goal of the season for Dover and the victory moved Whites to joint fifth on points with Lincoln City.