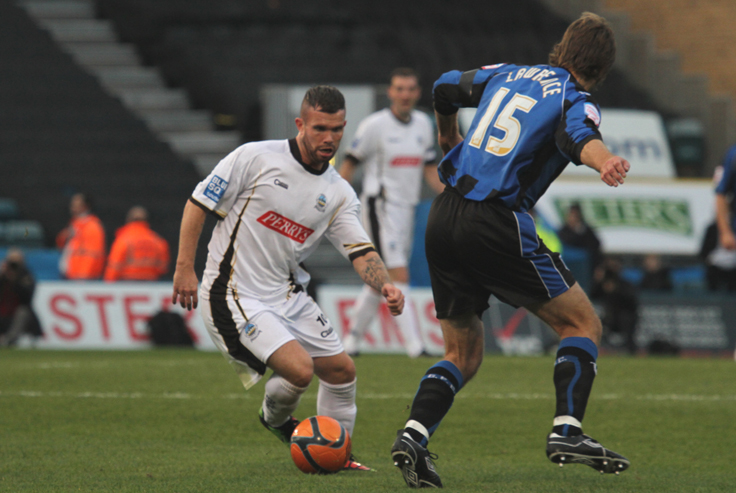 *BS*Dover Athletic will host two League Two clubs in the next few days. Dagenham & Redbridge come to Crabble on Saturday and then Gillingham visit on Tuesday evening.*BF*

John Still’s Dagenham team will take on Nicky Forster’s revamped squad in our second home friendly of pre-season. Kick-off is at 3.00pm on Saturday.

On Tuesday Gillingham’s first team squad arrive for the first match between the sides since the club’s unforgettable FA Cup victory at Priestfield in 2010.

New boss Martin Allen is likely to include several former Dover players in his squad. Most notable will be the return of striker Adam Birchall, one year on from his transfer to Gillingham.

Everyone at Dover Athletic is delighted to see Adam back on the football pitch after a cruciate ligament injury just two weeks after the move ruled him out of action for 12 months.

The goalscoring hero of Whites’ unprecedented FA Cup run in 2010/11, Adam will always be remembered for THAT goal at Priestfield against his current employers and a double strike against Aldershot at Crabble to put Dover Athletic into the third round proper.

Adam recently told BBC Radio Kent: “It’s been really difficult and a massive test of my character and professionalism.

“I’ve put my head down and done everything I need to. The next stage is to get out there and do the business.”

Also returning will be right back Matt Fish, who spent four seasons at Crabble, playing a huge part in the club’s double promotion from the Ryman League and FA Cup success. Meanwhile, former goalkeeper Ross Flitney is currently injured so won’t play for Gills on Tuesday.

Former Dover and Gillingham boss Andy Hessenthaler remains at Priestfield as Director of Football after vacating the managerial role at the end of last season. While at Crabble he led the club to consecutive Ryman League championships in style and 2nd place in the club’s first Blue Square Bet South season.

We look forward to welcoming them all back to the club on Tuesday night and hope to see a big crowd at Crabble for this special pre-season friendly.