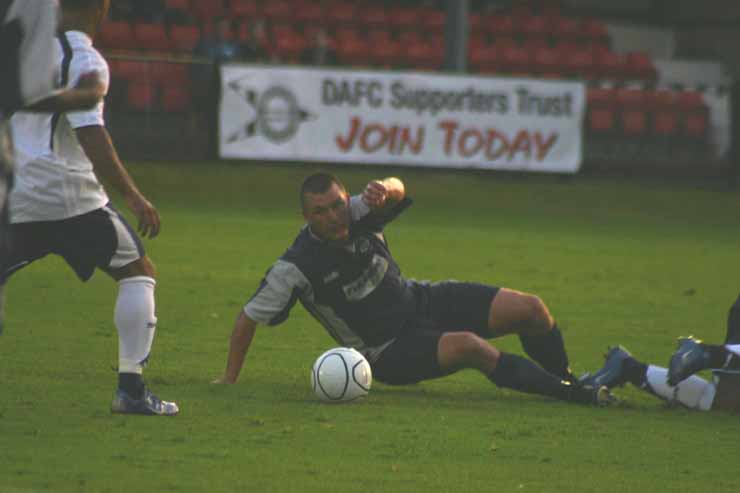 *BS*DANNY CHAPMAN this week visited a specialist about a complex injury problem which has caused him to be on the sidelines for two months.

*BF*The Whites midfield ace admits, although he is frustrated at not being involved in first-team action, he understands the importance of getting to the bottom of the problem.

Danny, whose experience will badly be missing from the Dover midfield in the big FA Cup clash with Bishop’s Stortford on Saturday, said rumours that his playing career could be over were complete nonsense.

He said: “I was playing with injections because that’s the kind of player I am. I will do anything to play and help Clive and the lads out – but the pain became too much during the match against Sittingbourne earlier in the season.

“I have a sharp pain at the bottom of my right buttock and it’s just impossible to play with it at the moment. I’ve had scans and am now having intensive physio.

“At first, I thought it might be sciatica but, thankfully, the scans have showed that’s not the case, which is a big relief.

“We did think the injury would only keep me out for a couple of weeks but it’s been so much worse than that – and I must admit it’s got me down.

*Q1*”All I want to do is play football and the frustrations at one point made me feel like jacking it in altogether. But I don’t want to do that – and hopefully all the problems will be sorted out soon.

“I could play with a painkilling injection but don’t want to suddenly pull up at a vital moment, and cost us a goal or something like that.

“That would be letting the club and my team-mates down – and that is not what I want to do.

“I’m not one of these players who likes sitting on the sidelines taking my wages – and am trying everything to get myself 100 per cent fit.

“Of course, the lads have done tremendously well in the FA Cup. Although I am happy for the lads, it’s not easy watching them play, so I’ve been helping Clive out with some scouting to take my mind off things.”

The club are awaiting a report from their own specialist on the injury.