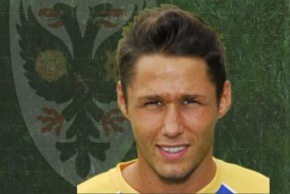 TOM DAVIS has joined Dover Athletic on a one-year deal.

*BF*The creative midfielder, who played a big role in AFC Wimbledon’s Blue Square South title-winning season, is sure to be a huge favourite among the Whites faithful.

Chairman Jim Parmenter said: “Tom is a very talented player and we’re delighted he has decided to join us. We needed some creativity at the middle of the park after losing Alan Pouton. We’re still working on another deal to bring a striker to the club. But that’s very much in the air at the moment.”

The player concerned was a regular at a Football League club last season and started his career as a trainee at a top Premier League club.

New-boy Davis, 25, a former England non-league international, began his career as a junior with Fulham before a move to Ebbsfleet.

He won promotion to the Conference National with both St Albans and Lewes.

Davis said: “I want to win things and that’s what Dover Athletic want too – so that’s why I’ve joined. I can’t wait for the season to start.”

Assistant-boss Darren Hare said: “Tom’s a quality player – he has a good engine, works hard and has a good range of passing.”

*BS*ALWAYS visit doverathletic.com for the top coverage of the Mighty Whites.