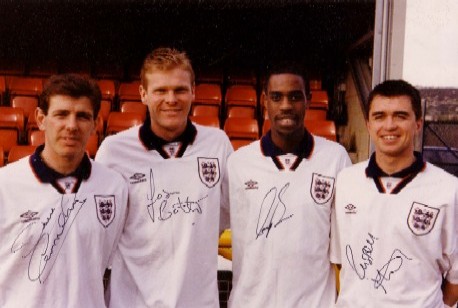 *IS*Today is day two of the doverathletic.com advent calendar – each day, a new piece of content will be uploaded onto the site for fans to enjoy.

This will range from interviews with ex-players, fans and volunteers, to a more in-depth look at how the club is run behind the scenes and a 2014 year review – and more. If there is a player you would like to be covered then please do let us know.

*BS*DAY ONE: RUSSELL MILTON*BF*
*BS**IS*”I will always have a soft spot for Dover. Sunday aside, I want them to do well…”*IF**BF*
*IS*Includes excerpts from feature written by the late Roger Jefferies*IF*

Ask any supporter of the club who followed the side in the 90’s who would make their list of best midfielders and I’m sure that the majority – if not all – would pick Russell Milton in their side.

Russell was arguably the most influential member of Chris Kinnear’s midfield engine room in the Dover Athletic side that climbed, painfully at first, out of the ashes of the defunct Dover FC to become the leading non-league side in Kent.

“I was back from Hong Kong one summer, at home in Folkestone,” he said, “When Dominic Castle (a reserve player at Crabble at the time) suggested that I look in at Dover.” And Chris Kinnear was a very good judge of football talent.

He made his first appearance for Dover against Crystal Palace in the Lennie Lee Testimonial Match just before the start of the 1992/93 season, the year of Whites’ successful second attempt to win promotion to the Conference.

“We were beating everybody in sight,” said Russell. “It seemed that we just couldn’t lose.”

The first attempt at promotion for Kinnear’s rejuvenated team had been at the end of the 1989/90 season when Dover had won the Beazer Homes Southern Premier League at a romp, with only four league defeats in the season, recording a record 102 points at the end of that campaign.

But, in a bizarre twist of fate, Bath City, recently relegated from the Conference and a club that would have an influence on Russell’s future career, finishing second in the league, were promoted instead due to Crabble being deemed “inadequate” for Conference football.*Lpic1*

This period of excitement and hope for Dover fans was to turn sour as the years went by.

But in that autumn of 1993, with newly promoted Dover Athletic riding high at the top of the Conference, Russell’s words, “We thought we could do anything,” seemed to have a prophetic ring.

The inevitable question resonated in all our minds: was Dover Athletic capable of going on through the Conference and into the Football League without stopping?

At that time, coming up to Christmas, 1993, it seemed possible. “We thought we could go straight into the Football League,” said Russell.

But, after a difficult mid-season, the championship challenge faded and the team finished a creditable eighth in the Conference.

Dover were a club that others were standing up and taking notice of, too. So much so that Russell, along with team-mates David Leworthy, Jason Bartlett and Corey Browne, were called up into the England semi-professional team.

Then, the wheels started to fall off. “There were several seasons in which Dover were perennial strugglers in the Conference, avoiding relegation one year, ironically, because another side could not go up. In fact, it was only because Boston United’s secretary “forgot” to post his club’s application for Conference membership before the set deadline that saved Whites from the drop.

Whites appealed – on the grounds that Crabble was going to be up to the required standard that summer (which it was) – but, in a decision that is still controversial today, the Conference upheld their ruling and the west country club was re-instated into the top flight of non-league football.

These days, Milton heads up Cheltenham Town’s academy and confesses he was pleased when the draw for the second round of the FA Cup set up a visit from his former side: “I was really happy with the draw when it was made.

“There were a few big League One sides in the draw who we could’ve been facing, like Bristol City, and I was hoping to avoid them. On the face of it, from Cheltenham Town’s point of view, we probably couldn’t have had a better draw. We know it’s not going to be easy and we’re under no illusions that it will be tough.

“Dover are on a great run of form recently and we haven’t exactly been firing, but I’m starting to see an upturn in our performances. Sunday will definitely be a tough game and we will have to play well to get through.

“For us, it’s about approaching it in the right way. Once you start underestimating a side or being complacent then you can be in trouble – like last season, we went to Tamworth who were bottom of the Conference at the time and we lost – so we know there’s a chance of an upset.*Lpic2*

“There is a big difference between League Two and the Conference but if you get a side on-form in the league below then they really can make life difficult for a professional side. We’ll certainly be giving it our best to ensure we get the right result.

“We have been looking at Dover ever since the draw was made and our manager is down there tonight watching the game against Torquay. We’re doing things the right way and not taking it lightly.

“I will always have a soft spot for Dover. Them, along with Arsenal, are the sides I look out for most as well as Cheltenham. I support all three clubs and have very fond memories of my time at Crabble. I know Jim and Chris well, and it will be good to see them again. I was really chuffed when they won promotion back to the Conference Premier last season and I am really glad they have started to pick up in the league and draw clear of the relegation zone.

“The game is potentially financially massive for the winner. The extra prize money, national coverage and chance of a big tie in the third round is very lucrative. We have been fortunate in recent years to play a couple of big sides at that stage – we went to Tottenham in 2012 and played Everton at home in 2013. They brought in a lot of money which really helps the club.

“When I was at Dover, we always struggled in the FA Cup. We never reached the first round and had a few disappointing defeats in the qualifying stages against teams we really should have beaten. Thankfully Chris seems to have sorted that all out now and it is great to see them in the second round for the second consecutive season.

“I’m looking forward to the game and seeing some old friends, I’m sure it will be a decent crowd and don’t worry – the ground has totally transformed since you last came here!”