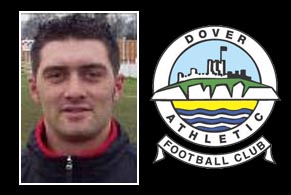 *BS*DEAN HILL has spoken exclusively to doverathletic.com after signing for the Whites today from Premier Division neighbours Ramsgate.

*BF*Dean is one of three signings from the Rams, with fellow defender Olly Schulz and winger Sam Jones also joining Andy Hessenthaler’s squad from the Thanet club.

Former Dover reserve star Hill rejoins the club this time very much part of the first-team squad after making a name for himself with the Rams.

Not only did he win a Ryman One championship-winning medal with the Rams two years ago, he played a key part in helping the Thanet club punch above their weight by reaching the Premier Division play-offs this season.

Versatile defender “Deano”, 24, was on the fringes of the first team at Crabble during our last season in the Conference under Neville Southall but failed to break into the team, apart from cup games and friendlies.

He left the club and went on to play for Ashford and Sittingbourne before moving to Ramsgate – establishing himself as a top-quality left back in the Premier Division.

Deano is a local lad, lives two minutes away from Crabble, and says he always had ambitions to play for the Whites – and is chuffed that Hess is now giving him that chance.

He said: “I’m joining because I believe Dover Athletic have the set-up in place to climb up the pyramid.

“Ramsgate are just as good a playing side in my book at the moment but Dover have the extra things that can’t be offered by my former club.

“Dover can afford top-quality coaching staff and have the ground, fanbase and facilities to progress. I’m looking to learn a lot under Hess and Darren Hare – they have big reputations in the game.

“It is tough at Ramsgate because until very recently Jimmy Ward couldn’t get in a coach. They’ve done very well to get to where they are. It’s sad to leave because we’ve achieve a lot there.

“But I am happy to be joining my local club. I believe we have every chance of doing well.”

Deano added that his old mate Craig Cloke played a part in persuading him to sign.

He said: “Clokey told me everything about what is happening at the club – and told me I should sign.

“We came through the ranks together and he’s a quality central defender, who will be one of the best in the Premier Division for sure.

“The move is perfect for me. I obviously live very near the ground and me and my missus have just had our first baby. I am so happy to be a Dover player.”