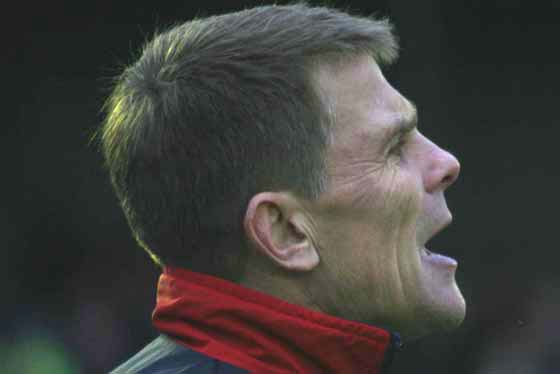 *BS*ANDY HESSENTHALER has urged his Dover team not to miss the bus – and with it a ride to glory.

*BF*Whites, 10 points clear of Tooting and Mitcham in the Ryman One title race, are within touching distance of reversing the bad fortune that has engulfed Crabble this decade.

And, with chairman Jim Parmenter providing free travel for fans to the showdown at Tooting a week on Saturday, Hessenthaler wants to make sure his players secure their ticket to promotion.

Before all the hype that will inevitably surround that game in South London, Dover host Chipstead – yet another potential banana skin tossed in front of Whites on their thrilling chase for a first league title in 15 years.

“Chipstead will not be easy,” warned the Dover boss, “they have been in good form recently and will come here confident of getting something from the game.”

Injuries to Lee Browning and Frannie Collin, who “thankfully has not torn his hamstring” says Hessenthaler, will significantly weaken Dover’s hand. Browning’s knee injury is not too serious but it is uncertain how much time will be needed for Collin to recover after he pulled up early on during the 2-0 win at Corinthian-Casuals last weekend.

“Both players have been fantastic for us,” admitted Hessenthaler, “but we’ve got to cope without them, so that means challenges will now be presented to players that will come in to replace them.”

The Gillingham legend is considering bringing himself back into the side to replace Browning. “I’ve played in the hole behind the front two strikers many times throughout my career with the Gills, and is somewhere I’m very comfortable playing,” he said. “The team has been playing so well recently, I’ve enjoyed watching and not needed to play much – but I am ready if I feel that I am going to help us win matches.”

Hessenthaler also suggested he will draft in promising talent from the youth ranks at Crabble to the squad. Steve O’Brien and Duncan Bishop have impressed and will almost certainly be on the bench.

The Dover boss said: “I’ve no qualms about including these two boys in the squad. They’ve been superb for the reserves and deserve their chance.”

Some supporters, naturally, have been getting carried away with the healthy lead at the top, but that advantage can be likened to a team being 2-0 ahead at half-time; it only needs taking one’s eye of the ball for a moment, and the opponents are back in the game.

And this is exactly Hessenthaler’s point.

“You simply cannot afford to think that the title is won yet,” he said. “If we slip up against Chipstead, and Tooting win, at the weekend, we’re only seven points clear. Then if they beat us and win their game in hand, our lead will be reduced to just one point. There is a very real danger of that happening if we don’t keep working hard.

“It’s happened already this season. We were seemingly coasting and built up a lead, then suddenly we drew a few games, and lost one, and Tooting were right back in it.”

In case you did not know, any fan attending the Chipstead game can claim a free coach ticket to Tooting the following week. Simply pop into the club shop and each supporter will receive a free coach ticket. Any additional tickets for friends who cannot make the Chipstead game can be obtained in return for a £9 donation to the Centre Spot 2008 Fund.