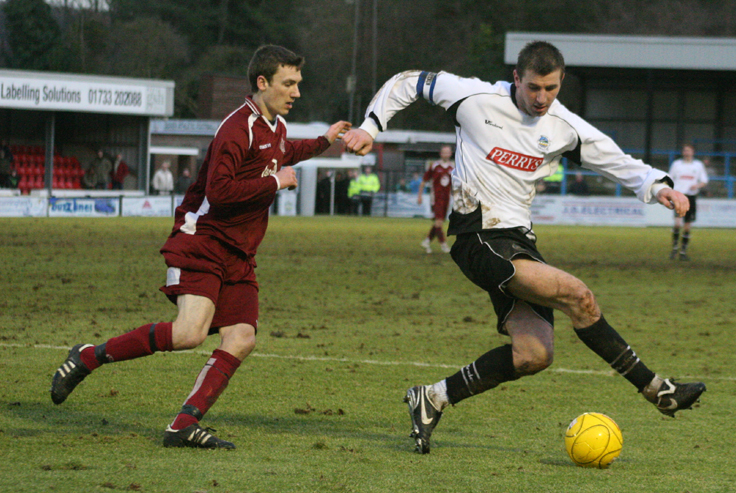 *BS*DOVER ATHLETIC secured at least a play-off place in the Ryman Premier League, courtesy of a cracking goal from veteran Alan Pouton twelve minutes from time, which finally saw off dogged resistance from an AFC Hornchurch who themselves are still very much in the hunt.*BF*

Substitute Pouton’s 78th minute curler, his fourth goal of the season, owed a lot to a fabulous run from fellow substitute Sam Jones and also illustrated just why the former Gillingham man is one of the best players at this level.

Indeed, watching Tonbridge Angels boss Tommy Warrilow, whose side play Hornchurch at the weekend, conceded, “Pouts is a bit special at this level and he does make a difference for Dover.”

This clearly wasn’t one of Dover’s better performances of the season but by winning their 16th home game out of seventeen, in such a fashion really does prove how Andy Hessenthaler’s side do not know when to give in.

With Hessenthaler losing his voice during the game, it was left to assistant manager Darren Hare to talk to BBC Radio Kent afterwards.

He said: “We weren’t happy with the first half, especially as we didn’t play very well on Saturday, but we kept at them and now we’re just six wins away from doing what people have been talking to us about for months.”

When asked if he was already fed up with all the media talk of championships and promotion, Hare grinned and said, “We know what we have to do and if we have to win ugly then so be it.”

Dover are confirmed as the first team in the country to guarantee a play-off place – not that that will please Hessenthaler and Hare as they both know that their charges are just eighteen points from securing back-to-back titles.