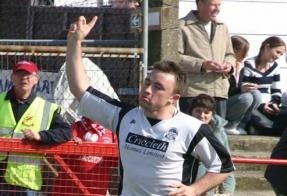 JIMMY DRYDEN reckons the signing of John Keister from Margate would have more than raised a few eyebrows around the county.

The Whites striker, currently recovering from his latest knee injury setback when he twisted it at Met Police in a play-off match, says a host of clubs would have loved to sign the experienced midfielder.

He said: “Keister is quality. I played against him a few times when I was at Folkestone and he’s a good footballer. He’s only a little guy but gets up well – is strong and a good passer.

“When I heard the news that we signed him, I was surprised we’d managed to get him. I am sure a few clubs are kicking themselves for missing out on him – but, of course, Dover are still capable of beating other local clubs at a higher level for top targets.

“Age isn’t a problem. I read he is 35 but he can certainly still play and it’s a good signing for us. If anything, he is going to give us invaluable experience. He knows how to win football matches. Danny Chapman and Keister at the centre of the park is going to be a formidable partnership.”

Jimmy was sadly unable to take part in the play-off final at Tonbridge and Angels boss Tony Dolby certainly would have sighed with relief when he heard that the Ryman League’s most prolific striker was going to miss the game.

Now the Whites ace is hoping to get himself fit for the new season and is visiting a specialist tomorrow (Thursday) to see how things are progressing.

He said: “I made the mistake of wearing studs at Met Police. The ground was soft but they got stuck in the ground and my knee twisted. It was terrible and, even though I tried to play on for a couple of minutes after being treated, it was clear I couldn’t take any further part.

“It was devastating and I was gutted as I watched us lose at Tonbridge. The defending was not good from us and that is what ultimately cost us on the day – and naturally we had some top players on the sidelines that could’ve influenced the outcome. But that’s football, sometimes, and now we’ve just got to dust ourselves off and get on with it next season.

“I hope Chris Chase signs. He lives near Daniel Braithwaite in the Watford area and the two of them could share the journey down to Dover. Both of them are good players so it’d be great to keep hold of them.”

“Braffers” has been offered a new deal, subject to a scan on a troublesome knee injury. The club are currently still hoping to sign Chase, who proved to be a vital player for Whites during the run-in last season.